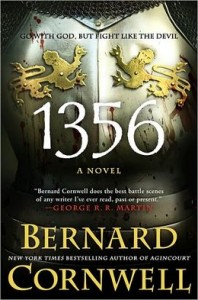 It’s 1356, and the search is on for La Malice, the legendary sword of St. Peter that he drew in Gethsemane to defend Jesus. It had been lost for centuries, but various groups are searching for it – each for their own reasons.

Bernard Cornwell’s novel 1356 shares that frightening and violent time in France with King Jean II defending his country from the invading English and King Edward II who believes that he is the rightful king of France.

The over 400 page novel is not a quick read, and the plethora of characters can take some time to get to know, but they all come together in the end to play their part not just in the search for La Malice, which was given to little known Saint Julien, but in the battle of Poitiers, a historically significant battle where the English attempted to repel the French attack, though they were outnumbered, hungry, and tired.

Many of the characters and happenings within the book are taken from history, which lends it an exciting and realistic tone. I love history, and I love learning more about the details of places and events I studied once upon a time in school.

The book is filled with evil characters from the (fictional) Cardinal Bessieres to the Count of Loubrouillade to Sculley, an amoral Scottish warrior brought to France to help fight the English. Fortunately, there are plenty of heroes, too, though they are made more charming and human by their many flaws.

Sir Thomas of Hookton, known as Le Batard, leads the Hellequin, a feared fighting troupe of English archers. He’s been sent by his liege lord to find La Malice – once he’s completed his mercenary duty of rescuing the adulterous wife of the Count of Labrouillade from her lover’s castle. Mission complete, he begins his search for the lost sword of St. Peter, racing against Cardinal Bessieres and others unbeknownst to him.

The book is filled with action and historical realities, with details that bring the time to life from the creation of the famed English goose feather arrows to the pros and cons of various types of armor used in different situations. A fascinating exploration of the chevauchee tactic utilized by the English to destroy the French countryside in an attempt to get the French army to engage and in the meantime weaken and disillusion the French populace, the book keeps moving from the first page to the end of the Battle of Poitiers.

Without spoilers, it is difficult to give a summary of the book. It is filled with characters with no seeming relevance who all come together to play their part in the hunt for La Malice and the Battle of Poitiers. Filled with twists and turns and much of the actual intrigue that occurred at the time in France, 1356 manages to take all the confusion and tumult and turn it into a compelling read that comes together beautifully in the end.

In the interest of full disclosure, I receive a copy of this book for review purposes. I received no other compensation, and all opinions remain my own.

Written by 5 Minutes for Books contributor Michelle who periodically wishes that she had lived in medieval Europe until she reads not romanticized versions of history by the ones like “1356” that spell out the brutal reality that she’d glad to have avoided. See what else she wishes for her life on her blog Honest & Truly, and follow her on Twitter where she is also @HonestAndTruly.

« On Reading: The Importance of Writing Space {with Giveaway}
The Passing Bells »