Chasing Mavericks, the inspirational true story of surfing phenom Jay Moriarity, is coming out in theaters TODAY. To celebrate the release, 20th Century Fox is giving away a great prize pack over at 5 Minutes for Mom. 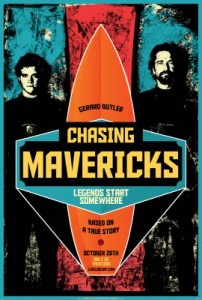 This movie was made with the help of some of the biggest names in the surfing world, and features some of the most mind-blowing wave footage ever captured on film. And the music of the film is derived from the soundtrack-taking place in a time of rock n’ roll (the 90s) in which some of the best Alternative Rock was recorded and released.

One lucky winner will receive:

Visit 5 Minutes for Mom to enter this great giveaway!

« Everything: What You Give and What You Gain to Become Like Jesus
The Giant and How He Humbugged America »