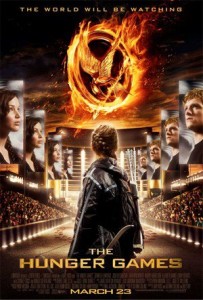 At 13 ½, my daughter Amanda is a bit too young to have been caught up in the Harry Potter books and movies as they were being released (though they are among her favorite books). As for Twilight, neither she nor I had read the books when the movies started coming out (though she finally gave in and read them), but we’ve truly experienced the entire Hunger Games hype from the very beginning, reading the first book before the others came out, and awaiting the release-dates of Catching Fire (even getting to read an Advanced Copy) and Mockingjay, and seeing Suzanne Collins herself do a Mockingjay reading.

I was truly as excited about the Hunger Games movie as I’ve been about almost any that I can recall. And Amanda definitely has been the epitome of a crazed teen (though she wasn’t allowed to attend the midnight showing, so maybe not quite). She’s militantly defended these books that she loves. She feels that those who have been reading the book in 2012 in anticipation of the movie are posers, and though she has two good friends who want to see the movie, she wouldn’t make plans with them until after she sees it since they hadn’t read the book.

And like Hogwarts, there will be people who are only acquainted with Panem through the movies. They can like it, and they can discuss it in regards to what it says about popular culture. They can still appreciate the strong female lead of Katniss, and they can swoon over Peeta and Gale (though they weren’t given much to swoon over in this first movie).

I’ve expressed some of my disappointment with the movie in our Hunger Games movie discussion post. But all in all — I liked it. I am very tolerant with book to screen adaptations, in general, but remember how I said that the movie might be even better than the book? It’s not. I think it’s a great complement to the book, but if you only see the movie, you will miss a lot.

Dawn wrote an impassioned response to the shortcomings of the movie at her blog, and summarized it as “fast food.” I agree completely, but unlike Dawn who worries that movie-goers aren’t getting the whole truth, I feel little concern for those who choose not to read the books. The books have been insanely popular — on amazon’s top 100 practically continuously since Catching Fire came out (and in the top 10 or 20 for much of that time, especially in the last few months). I think that the movie will definitely keep the books in the spotlight, and with the way the movie ended, I hope people will read Catching Fire (I know that I grabbed my copy as soon as I got home), and I hope that they’ll experience the inner dialogue of Katniss via the first-person telling in the book.

After thinking for a couple of days since I saw it on Friday morning, I think that I’ve figured out the biggest problem: this is just part one.

Those of us who have read the whole series have that in our my mind. It’s hard to know where one ends I’m re-reading Catching Fire now, and the real crux of the love triangle — the biggest felt omission in the movie — doesn’t really come out fully until that installment. Yes, we knew more in book one about Katniss’ conflict over Gale than was indicated on screen, but it all really fleshed out in the second installment. Going right to Catching Fire has helped me feel a little better about what was shown or not shown in this first installment.

But I’m going to accept that it’s now a movie, and there will be people who only know the movie, and people who jump on the bandwagon and don’t fully appreciate either the books or the movie, and I’m going to live with that. When a book becomes a phenomenon, we are given more to love, but also more to nitpick, and let’s not even talk about the Movie Tie-in Edition, which slaps a new cover on the same old pages. In this case, it’s not so bad, but in some cases the book barely resembles the movie.

I was a fan from the beginning, but the hype has reminded me why. Seeing the movie has rekindled my interest, and honestly going back the second time to re-read has forced me to think a lot more about the content and the themes. I have to admit that one reason I was one of the people disappointed with Mockingjay is because I was reading for plot (as in “What’s going to happen to Katniss?” and “Gale or Peeta?”).

I’m still in the midst of the hype and the hoopla and can’t wait to hear Amanda’s thoughts after she sees it with her friends this afternoon. I’ll be counting down the days until the projected Thanksgiving 2013 release of Catching Fire, but until then I’ll satisfy my hunger with the books. And that’s no consolation prize.

Have you seen the movie? Please join in our thread: Let’s Discuss the Hunger Games Movie HERE.

If you want to read Dawn’s reviews of all the books, and all of our latest posts including my interview with the producer, you can just type “Hunger Games” into the search bar at the top of the right sidebar, and may the odds be ever in your favor.