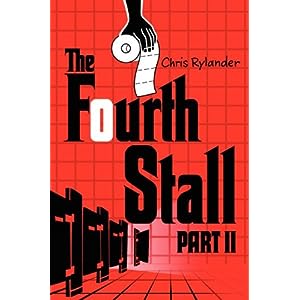 Last year, Chris Rylander introduced us to Mac, a sixth-grader who has set up shop in an old, unused boys’ bathroom, from which he runs his business in The Fourth Stall (linked to my review). He’s in the business of helping kids out with their problems, and business is good. Now Mac is back, and the problems kids are bringing him are bigger than ever in The Fourth Stall, Part II.

When Trixie von Parkway comes to see Mac in his bathroom stall office, he knows from the start that this job is going to be different. It probably doesn’t help that Trixie (if that’s even her real name) makes him stumble over his words or feel instantaneously goofy, but it’s even more than that. The request that she brings him is just the first of several that leave Mac wondering if he can actually find a way to successfully complete these jobs.

When Trixie’s story starts to unravel a little, Mac discovers that she may not be telling him the whole truth. As he and his trusty assistants try to put the pieces together on that front, the puzzle only gets larger as more and more odd things are happening at the school. From the mysterious animal droppings that are being found in lockers to the sudden and surprising school lunch menu changes, kids are wondering what is going on. Add to it all, the upcoming SMART exams (Standardized Minimum Aptitude Reviewer Tests) have everyone, teacher and students alike, in a tizzy. Could the pieces all lead to a teacher or a school administrator? Is Mac way out of his sixth grade league here? What will he do when his entire school is on the line?

Ah, there’s some suspense in this middle grade novel, and there are just enough mysteries to keep even “reluctant readers” turning the pages. Filled with the same irreverent tone that evokes the watered down “tough guy” caricature that Rylander introduced in the first novel, the second installment continues Mac’s adventures and introduces some greater challenges to his ability to continue his business. I found this one to be more plot-driven than the first, with less of an emphasis on the friendship between Mac and his best friend/business partner Vince and more of a focus on the characters’ attempts at figuring out what is happening in the school. The Fourth Stall, Part II kept me entertained and gets a hearty endorsement from my own 11 year old son, too!

Giveaway time! We have two books for a lucky winner- a hardcover copy of The Fourth Stall, Part II and a paperback copy of last year’s The Fourth Stall, both with bookplates signed by the author Chris Rylander. Please leave a comment here to be entered (US and Canada addresses only), and the winner will be announced on 3/7.

Dawn likes returning to middle grade fiction for some innocent, light reading, as well as to connect with what keeps her own son excitedly turning the pages. She blogs at my thoughts exactly.

« The One and Only Ivan, a 5 Star Read
On Reading: Why I Wrote “The Beautiful Wife” »