I’ve been a fan of memoir for a while. I really liked the run of “project memoirs” I read like The Happiness Project and anything by A.J. Jacobs. But lately, I’ve read memoirs with a different theme. Stories like Running Away to Home deal with people who take risks by leaving everything familiar behind to embark on some sort of dream.

Benjamin Mee’s We Bought a Zoo fits perfectly in this latter category. Due to several changes in his family — namely an inheritance from his father’s death and not wanting his mother to grow old alone — Mee and some of his siblings ended up buying a plot of land that happened to contain a zoo.

Mee’s writing style is funny with flashes of the technical. Professionally he was trained as a psychologist making some of his observations about the humans and animals he works with very interesting. He has also done some science writing, so that factors into his style as well. I love a memoir that teaches me about interesting things as I’m reading.

The one downside is that it does read a little detached. He’s writing about his wife’s illness (in the movie she’s already passed away), and her death and his recovery, but if you’re not reading closely, you almost miss any reflection about that. But this is an upside as well. It allows the story to truly focus on the adventure and the strain (and even the danger) of buying a dilapidated zoo and readying it to reopen.

The most recent occasion of nocturnal fear was while walking the dog, Leon. I heard something big moving very slowly toward me. I hesitated, hoping that the idiot dog would pick up on it, and, ideally, challenge it and be eaten by it rather than me. But he remained oblivious, selfishly snuffling around the many animal scents rather than volunteering to sacrifice his life for me (page 203).

Benjamin and Leon the dog were both safe, as instead of being a puma in heat as he had worried, it was actually a neighbor’s cow “stalking me because it presumably thought that I was the farmer, breaking the habit of a lifetime by bringing it food at 3 a.m.” 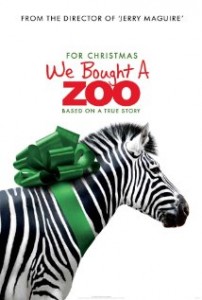 Read my review of the movie over at 5 Minutes for Mom today. I loved this movie. Check out who I recommend this film for (and who I think should skip it). It’s a completely different take on the story than the book, definitely exploring more of the emotional side while still looking at the adventure and virtual impossibility of making this zoo work, but in spite of the many differences, it’s obvious that the idea is the same. I liked them both in different ways (but love the overall presentation of the movie).

I’m giving away my own very gently used copy of the book. I bought it at the airport and read it, but it’s ready for a new owner! Just leave a comment if you’d like to win, and I’ll announce the winner on the 12/21 giveaway post (U.S. shipping only, please). If you comment on the We Bought a Zoo movie review as well, I’ll count that comment as an extra entry for the book. The giveaway is closed.

Jennifer Donovan loves books and movies, for different reasons. She blogs at Snapshot about life with her family in Houston.

« If You Give a Dog a Donut
Stand-Out Cybils Nominated Picture Books, #9 »