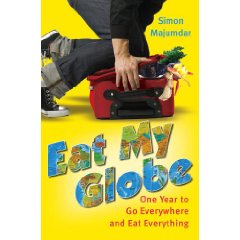 My favorite sub-genres of the memoir include the “project memoir*,” followed closely behind by the “travel memoir.” So when I came across Simon Majumbar’s Eat My Globe: One Year to Go Everywhere and Eat Everything, I thought it would be a book I’d enjoy since it combines two of my favorite types of non-fiction.

Here’s the thing about memoir. If you don’t like the memoirist, the book will get old really fast. I have a feeling that’s why some of you avoid memoir like the plague. You may have read a few and wondered why people love this genre full of people self-absorbed enough to write about the minutiae of their experiences, often sharing too much information along the way.

So, that said, I liked Simon Majumdar. He made no excuses for the fact that he might, in fact, be a bit of a jerk. He shares his shortcomings with a bit of a swagger as if to say, “This is me. Like it or lump it.” That self-awareness and self-deprecating humor helped make this the kind of book that made me grin while I was reading it.

I didn’t only grin, but my mouth literally watered many times as I was reading his descriptions of the food he ate while on the road — whether prepared by an acclaimed chef or eaten from a street vendor (in fact my mouth is watering now as I’m writing about it). I also cringed a few times when he recounted some things that he ate bravely for the sake of meeting his mission to “eat everything.” Some of these included cod whale sperm, rat, dog, and fermented shark (in fact I’m cringing now as I write it).

This book was an enjoyable read. As you can imagine, taking a year to travel the world and take in the food that the regions are known for, resulted in just a cursory investigation of each cuisine or culture. However, because Majumdar was mostly guided by people who he had met on web-based food sites, he found out interesting tidbits about the people or the food. He didn’t just eat fine cuisine either (in fact, he ate very little of that). Instead, he ate what the locals ate at street vendors, local cafes, and in people’s homes.

*My favorite examples of what I call a “project memoir” are by A.J. Jacobs. Another compelling one was Julie and Julia: My Year of Cooking Dangerously (The movie is coming out this August) and One Year Off: Leaving It All Behind for a Round-the-World Journey with Our Children.

Managing Editor Jennifer Donovan enjoys traveling when she can, but reading about travel is almost as enjoyable. She blogs about some of her traveling adventures (in addition to sharing her self-absorbed thoughts of everyday life) at Snapshot.