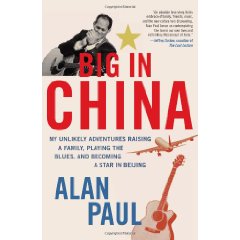 When writer Alan Paul’s wife was offered a job as the Wall Street Journal’s China bureau chief, a job that would require the family to relocate to Beijing for 3 years, his father told him “You can’t say no to this.” Paul admits that the two of them had begun to be restless in what he refers to as a “velvet-lined rut” and what the back cover calls “their staid suburban existence.” So, with that heady combination of excitement and nausea-inducing fear that is familiar to all expatriates, they packed up their 3 kids, then 7, 4, and 2, and headed off into the great unknown.

He writes of adjusting to what he terms Ex-Pat land, a place where you can have round-the-clock help in your homes and yet pay extravagantly for Hershey’s syrup, where your kids wear uniforms and go to a British school and you take your life in your hands every time you get behind the wheel of a car, where a visit to a zoo meant their three blonde children got more attention than the animals. He chooses to be as involved in the local life as possible, taking Chinese lessons and spending time with local friends as much as possible, and shopping in the local market which is eventually bulldozed to make way for the 2008 Olympics.

At first, Paul struggles a bit with being the “trailing spouse,” but he soon finds himself writing a blog (The Expat Life) and a weekly column for the Wall Street Journal, for which he wins an award. And he forms a band with a Chinese musician named Woodie Wu. (The natural name for this band? The Woodie Alan. Of course!). Paul was already involved in music; he was a writer for various publications like Guitar World and Slam, but had never really pushed himself in his own development as a musician. Suddenly he finds himself playing with serious musicians, fronting what is soon called “Beijing’s premier blues and jam band.” His descriptions of his time with them, touring China and playing several music festivals to enormous acclaim, hanging out in hotels and eating meals in the middle of the night while they have to translate between themselves, form the heart of the memoir. In choosing to leave the safety of home and venture to another culture, Paul finds that he has the courage to leave the safety of the audience and enter the spotlight. His experience of forming a successful band is life-changing.

From my own perspective, I appreciated his tales of expat life, as it’s one I’m very familiar with. Although at first glance there wouldn’t seem to be much similarity between the teeming metropolis of Beijing, China, and Nouakchott, Mauritania, where goats and camels roam the unpaved sandy streets, I think that anyone who leaves his home culture to enter as fully as possible into another will experience certain similarities, no matter how different the surface may look. I especially enjoyed glimpses into their family life, as his kids make major adjustments and only realize when they visit their old American home how far they’ve come. And, as Paul discovers in Big in China: My Unlikely Adventures Raising a Family, Playing the Blues, and Becoming a Star in Beijing

, entering a new culture can give you a new chance to realize your dreams, to spread your wings, to start afresh in a way you hadn’t dreamed you could.

My one complaint with the book is that I feel Paul had a hard time deciding which events to focus on, and the result is a bit like a smorgasbord, with a smattering of everything. He’s got enough material here to write a book on his family’s adjustments and travels round China, and another one on his successful band and what the formation and existence of that band meant to him personally. I often wanted him to go deeper, to go into more detail. I assume he didn’t want to write a thousand pages and I appreciate that, but I did feel I wanted more.

Nonetheless, Big in China: My Unlikely Adventures Raising a Family, Playing the Blues, and Becoming a Star in Beijing

is a fascinating memoir and travel adventure; I thoroughly enjoyed it and highly recommend it.

Elizabeth hasn’t been to China, yet, but she’s certainly experienced life in Ex-Pat Land. Read more of her adventures overseas at her blog www.planetnomad.wordpress.com.

« What’s on Your Nightstand — March 2011
Baseball Season in Picture Books, with Giveaway »