It’s Z-Dad and the Z-Kids from Bookie Woogie signing in! Thanks so much to 5 Minutes For Books for letting us share our thoughts on the latest Narnia movie. Earlier this year, our family re-read C. S. Lewis’ books for our own little “Summer of Narnia.” For our thoughts on the books (revealing additional information on the characters and plot) you are welcome to peek here. The following discussion about the movies picks up where that prior review leaves off… 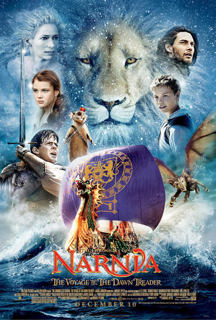 Gracie (age 10):  We watched The Voyage of the Dawn Treader!
Elijah (age 5):  It was awesome.
Gracie:  It was so awesome. I think it is my favorite out of the three Narnia movies so far.
Isaac (age 12):  It’s very different from the first two. The first two movies had realistic battles and stuff. But this one had more fantasy things — mystical creatures and crazy places.
Lily (age 7):  People should see this movie. They should, they should, they should.
Gracie:  They changed the movie completely from the book. It still has Caspian, Edmund, Lucy, and Eustace.
Lily:  But the main point in the book is sailing to the end of the world and finding the seven lords.
Gracie:  In the movie, they are trying to save everyone from this evil mist by getting swords and laying them down on Aslan’s Table.
Dad:  There was never much explanation as to what exactly was going on with the mist and swords.
Isaac:  I don’t think that matters too much.
Gracie:  The story goes a lot faster in the movie theater. They cut out a lot of parts from the book. I was getting kind of anxious when I wasn’t seeing Deathwater Island in the show. Then I went, phwew when it came.
Isaac:  But I was surprised — they fit pretty much every scene from the book. They just shuffled stuff around and shortened things.
Gracie:  The one part I didn’t like was the slave trader scene. Caspian just came in and said “I’m your king!”
Dad:  They really sped it up. They made it a quick scene instead of long and drawn out.
Gracie:  Yeah. And I think that stinks.
Dad:  You would have rather stayed in the theater for another half hour just to watch them overturn a table and float some ships by?
Gracie:  It was not an okay part to skip.
Dad:  Really? That’s my least favorite part of the book. If I was making the movie, I would have skipped everything about that island.
Gracie:  What? What!
Dad:  So what would you have skipped instead?
Gracie:  Nothing. I would just make the movie longer. They should totally redo this movie. They should make it four or five hours long so they can get in all the detail.
Dad:  Five hours?
Isaac:  That would not be fun to watch.
Dad:  You guys would have gotten hungry.
Gracie:  That’s what popcorn is for.
Dad:  Or maybe that’s what a book is for. There you can have all your detail.
Gracie:  Yeah. I guess so.
Elijah:  Boys and girls should read the book and see the movie.
Gracie:  Start the book as soon as you can. Then go watch the movie while it is still in theaters. Then finish the book. Actually, you can do it in whatever order you want. Just make sure you read the book.
Lily:  It is fun to read and imagine how people look – they can be however you want them to.
Gracie:  I like making things up in my mind.
Lily:  I think I like my imagination better too.
Dad:  Who was your favorite character in the movie?
Gracie:  Eustace was my favorite actor.
Dad:  Everyone in that theater loved him! I was surprised how much everyone responded to him.
Gracie:  He was hilarious! “Where in the blazes am I!”
Dad:  And what was your favorite part of the movie?
Elijah:  Everything was awesome.
Gracie:  The sea serpent was cool.
Lily:  It was good they saved it for the end.
Gracie:  The final battle with the sea serpent was definitely the best part of the movie.
Isaac:  The sea serpent was earlier in the book, but they made it happen at the very end for the movie. For effect. It made it more exciting.
Lily:  They switched around the order of the adventures so they could make the fun ones at the end. The cool ones. They put all the boring ones at the beginning.
Dad:  The only section of the book that doesn’t have a single picture is the sea serpent episode. So how did the movie-serpent compare to your imaginations?
Gracie:  Scary. Really freaky!
Dad:  Too scary?
Lily:  No!
Elijah:  To the people inside the movie, he looked scary. But to me, he looked awesome.
Dad:  It was the neatest sea serpent I’ve ever seen.
Isaac:  I honestly don’t think they copied the sea serpent from anyone else. They invented their own design for this movie.
Dad:  Yeah, and it did something… something…
Isaac:  Freaky.
Dad:  Right!
Isaac:  None of us were expecting it.
Dad:  We won’t say what it was, but it sure freaked me out! How about you?
Elijah:  I was okay.
Dad:  Would you want to see one like that in real life?
Elijah:  No way.
Dad:  Would other five-year-olds like this movie, or would it be too scary?
Elijah:  My friend Nathan would think it was cool. But I think Adriana would be scared – just a little tiny bit. I think she would think that the sea serpent was going to eat someone. Nathan would think all of it was cool.
Dad:  So, final verdict: thumbs up or thumbs down? Narni-yum or Narni-yuck?
Lily:  Narni-yum!
Gracie:  Narni-awesome!

You can find weekly book reviews by Isaac, Grace, Lily, and Elijah at their blog Bookie Woogie. You can see samples of their art on their other blog Chicken Nugget Lemon Tooty.