The adversarial relationship between Jean Valjean and Javert.

A romance between Cosette and Marius.

A love of country and a desire for change.

A struggle of ideals.

Each of these themes plays strong, whether in the book, the Broadway musical, or the movie. 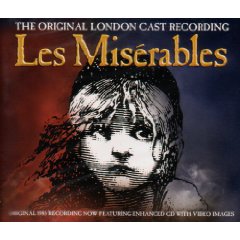 Let’s talk about the musical first.

I’ve been listening to the soundtrack this month, and while I don’t particularly remember seeing the show (at least 12 years ago!), the music speaks for itself. In fact, I even think that it added something to Amanda’s “boring” opinion on the version she read. I had her listen specifically to “Who Am I?” (which is now a song that Kyle, 4 1/2, asks for over and over again) and “Confrontation” (between Javert and Jean Valjean), and she liked them, and even asked me to add them to her playlist on my ipod!

If you enjoyed the book, I definitely recommend that you listen to the Broadway score. Many libraries probably have it or you can download it on itunes or buy it at amazon. What I love about Broadway is that music awakens something in you. The telling of a story in this format is second to none (I posted my experiences On Broadway at my blog Snapshot today).

As in most Broadway shows, there is some baudy humor. The women of the evening’s song “Lovely Ladies” is a strong PG13, and there are other lines in other songs as well, but the songs that Javert and Jean Valjean sing are so perfect.

I also came to know and love the character of Eponine here. I don’t know if much of her story was cut in my abridged version or if the musical took liberties, but her character is big in the musical (and can I say that it has me almost thinking about tackling the unabridged version to see what I’ve missed!).

Dawn referenced the musical a few times in our Les Miserables podcast, and at the end urged everyone to see it if they can, and if they can’t, to at least listen to it (I think that she had Lisa convinced). 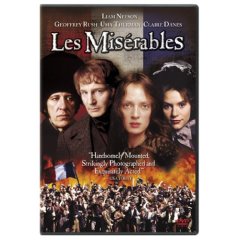 I recently watched the DVD for the third time. Geoffrey Rush is Javert. Liam Neesen is Jean Valjean. Uma Thurman is Fantine, and Claire Danes is Cosette.

The relationship between Jean Valjean and Javert is there. It’s strong. Valjean is painted as a little warmer than my abridged version revealed — with a more tender affection for Fantine, and people in general (he and Cosette are seen serving meals to the poor in a sort of soup kitchen, and he’s joking around with the street urchins). Javert is just as rigid and cold as he should be.

The first time I saw this movie was in 1999, 3 years after I read the movie and saw the musical. It was in preparation for a Bible study retreat that capped off a study of Romans, and the themes in this work of mercy vs. the law was fabulous. I liked the movie a lot. I thought it was a good representation of the story, and it was a great way to bring those who hadn’t read the book up to speed.

A couple of Christmases ago, I put the movie on my wishlist and my husband and I watched the movie again, and he enjoyed it as well (he also loves the musical).

BUT here on this third viewing, immediately on the heels of reading the book again and enjoying the musical score, and reading everyone else’s thoughts on it, and discussing her impressions from years ago with Dawn the book-purist, I was disappointed.

That said, if you didn’t finish the book, or didn’t even read but wanted to — watch the movie. It’s a good movie. There is definitely dramatic license taken, so it’s not true to the book, however it may be more dramatic than the book for that very reason, but I think it does convey the major themes of love, redemption, and mercy versus the law.

Do I still love it? I’m not so sure (and I think that I’m holding Dawn responsible). I love the story, and so I do think that I will return to the movie again to get a fix, in addition to singing along with the Broadway cast — to Kyle and anyone who will listen (the tween forbids public singing), “Who am I? 2-4-6-0-1. . . . !”

Your thoughts and opinions?

« Les Miserables Podcast
A Book and a Craft: Spring »