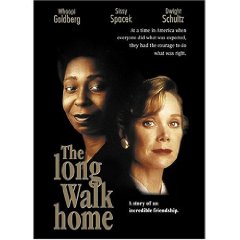 I’m famous for blurring the lines a little bit in this column, and this week is no exception. Since many movies bear no resemblance at all to the books that they are supposedly based upon, why can’t I review a movie that fleshed out a book that I read recently, even if the two have no real connection?

When I read The Help, I thought of a movie I had seen years ago. That movie is The Long Walk Home, and thanks to Netflix, I watched the 1991 release again recently.

Immediately, my instinct about the similarities to The Help was confirmed. The movie is narrated by an adult woman recalling the Montgomery Bus Boycott that happened when she was a child. She tells about her maid, Odessa, “the first woman who rocked me to sleep,” and her mama. Indeed Odessa is an “Aibileen” sort of character — one who loves those children she cares for, and works with a quiet strength for the White family that employs her while they have cocktail parties and attend Junior League functions. Odessa even wears the white dress uniform as described in the novel.

Both that book and this movie are stories set in the segregated south in which a Black woman and a White woman each ended up working together for change.

In addition, this book is a great account of Freedom Walkers. The movie is fiction, but it accurately portrayed the facts presented about the Bus Boycotts in that book.

I (re)recommend each of these books, and the movie as well, as a look at the segregated South in the 50’s. It’s rated PG, and I wasn’t particularly paying attention to how child-friendly it was. There may have been some mild language, but I would think that it would be appropriate for older school children who are interested in that time in history.