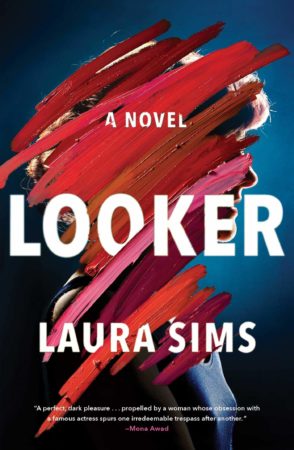 Looker by Laura Sims has been on all of the must-read lists so far this year. “A dazzling, razor-sharp debut novel about a woman whose obsession with the beautiful actress on her block drives her to the edge” is the description from the publisher.

But to call this novel a thriller is not really accurate. It’s more a character study of a woman who is spiraling out of control after her marriage dissolves following several unsuccessful attempts at getting pregnant.

As the story progresses I started waiting for the thriller part of the story to start. The unnamed narrator’s obsession with the famous actress on her block is definitely a big part of the story, but so are her interactions with both her soon-to-be-ex-husband and a student in her poetry class. All of these contribute to her descent into madness, but none of it makes the story a thriller.

The narrator is an unreliable one, and she’s often vindictive. She takes zero responsibility for her problems or her actions. While at times I was cheering for her, her actions are clearly those of someone who has lost her grip on reality, and I started feeling sorry for her and ultimately horrified by her.

Looker is on the shorter side, under 200 pages, and it was just the perfect length. I don’t know that I could have taken much more from this character, but the ending is a satisfying one.

Notes on the audiobook: Katherine Fenton does an eerily good job of portraying this character. At a running time of 5:30 hours it’s a quick listen.

« The Current
Tiger Days: A Book of Feelings »