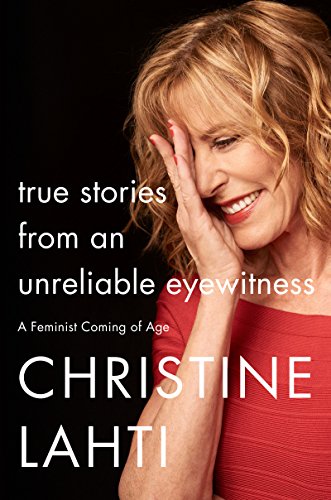 I have always loved the actress Christine Lahti. I couldn’t tell you why. It’s not that she was in one of my favorite all time movies or television shows, but I felt like I appreciated her body of work, and so if she had a guest arc on a show or was in a movie, it was a definite selling point for me. That was one of the two things that caused me to jump on the blog tour for her new book True Stories from an Unreliable Eyewitness. The second was the subtitle “a feminist coming of age.”

Sending a daughter off to navigate adulthood has had me thinking a LOT about feminism (said daughter is a sophomore at University of Michigan, where Lahti also attended. Maybe that’s another reason I like her. Go Blue!). She is a proud feminist, and though I’ve always believed a woman should be able to do anything a man can, like many women of my generation, I’ve shied away from the f-word (both of them, honestly). My daughter sent me a text last month, and said, “Do you call yourself a feminist,” and I could answer “yes” without giving it a thought, but five years ago, my answer might have been different. Lahti talks about this current generation of young women in one of her essays, and how she — an old hippie feminist — had a hard time understanding some of their choices at first. But she also shares the same awakening to it through the eyes of her young adult daughter.

In addition to motherhood, Lahti’s essays also touch on mental illness, marriage, her career (“What I Wished I’d Known about Love Scenes” among other things), self-doubt, aging, and that “unreliable” memory. She openly cops to the fact that she might not remember everything exactly right, but it’s her story and her memories.

This is a frank book. Lahti openly (and with colorful language) discusses her free love years, her indignation over several issues, family dysfunction, and the injustices that she personally and women in general have historically faced and continue to deal with, but this book is not a rant. It’s more of a riot.

I had forgotten that Christine was in a show I truly enjoyed, Chicago Hope, and she even won a Golden Globe for her role (when will that show be available to stream?). After reading this book, I now have several movies on my to-be-watched list so that I can enjoy more of her body of work.

You can purchase and find out more at the HarperCollins site. You can also follow the author on twitter @christinealahti.

« Good Neighbors
The Fox Hunt: A Refugee’s Memoir of Coming to America »