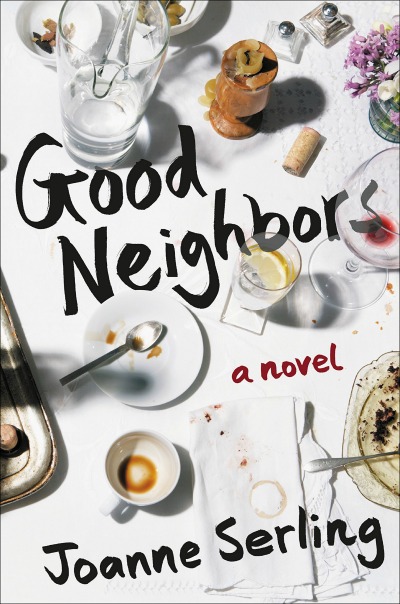 Picture a posh suburb with its manicured lawns and homes boasting large, ornate front doors. Can you imagine the lives that are lived behind those doors? Joanne Serling’s debut novel, Good Neighbors, brings readers into that neighborhood with a focus on four families who appear to be close friends, vacationing together and celebrating holidays as a group. But, as most suspense novels will prove, appearances aren’t to be trusted.

When one of the couples announces they are adopting a preschool-aged child from Russia, the others in the group experience a mixture of emotions, though outwardly they are nothing but supportive. They know that Paige and Gene have struggled to conceive a second child and that Paige especially feels that loss. But from the beginning, there’s a collective unease about this pending adoption, though the reasoning isn’t made quite clear to the reader. Perhaps that’s because much of the storytelling is vague due to the perspective of the narrator, Nicole, who can’t seem to firm up an opinion on much of anything. She vacillates between suspicion of her neighbors after they bring Winnie home and shame for possibly thinking anything bad about her friend.

You know how in some suspense novels, you have to question the reliability of the narrator? Well, in this one, I questioned the narrator’s basic well-being even above her reliability, for right from the beginning, almost every opinion or observation she shared was immediately rebutted by the exact opposite expressed by her as a, “but what if?” Sometimes the sentiments were somewhat relatable, especially when she questioned her own parenting practices, something that I’m confident most parents experience. But this habit became so consistent it was annoying and made me dislike the protagonist more and more as the book continued. There were red flags about Paige and Gene’s family life from the very beginning, and they were gigantic and waving freely, so it was difficult to empathize with the adults who didn’t know how to handle their concerns. If anything, their choices to try to save face among each other socially became frustrating and unforgivable.

I read this novel quickly, and I really wanted to know what happened to the young child at the center of the suspenseful storyline. Unfortunately, I found that aspect of the ending a bit unsatisfying. But, honestly, all the characters had very few positive or redeeming characteristics, and instead were rich, privileged, and seemingly incapable of true friendships or relationships. If this was meant to be a commentary on this portion of today’s society, I’m thankful my middle-class self has a very different reality.

For more perspectives, check out the TLC Book Tour for Good Neighbors.