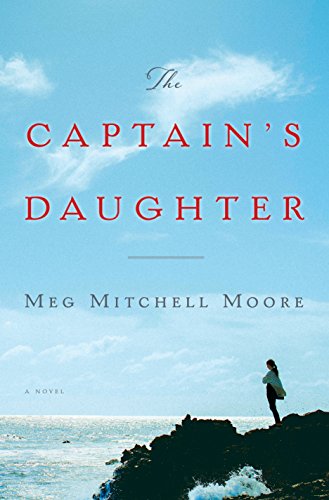 I had The Captain’s Daughter as an e-galley on my Kindle, and when I’d see the title and nothing else, I forgot why I had agreed to review it. It sounded gothic or romancey or something, but if I was reading a real book, I would have opened the cover each time. The cover conveys the fact that it’s a modern story. It’s a family story, one of transition, and a tug between the old and the new, which is always appealing to me.

Eliza grew up in Little Harbor, Maine, the daughter of — yes — a captain, well a captain of his small lobster boat. Her mom died when she was young, so while focusing on her studies, which bought her a ticket out, she also helped her father haul lobster traps.

She is living a charmed life in an upscale Massachusetts suburb with her husband and two tween daughters, but she sometimes feels like an imposter in her husband’s monied family.

When her father takes a spill while out boating, she returns home to check on him and finds things to be a bit worse than she thought. She stays on to help him out while her husband juggles his building business with taking care of the girls.

While in Little Harbor, Eliza meets Mary, a teen girl in a troubling relationship. The Captain’s Daughter is Mary’s story too.

Eliza is also faced with seeing her high school sweetheart every day. Does she feel more comfortable with him? Is she more a part of her past or her present?

This was a really solid read. It was neither totally light and fluffy or nor too deep. Author Meg Mitchell Moore explores the relationship between who we were and who we are and want to be, while taking into consideration the effect that others have on shaping who we become.