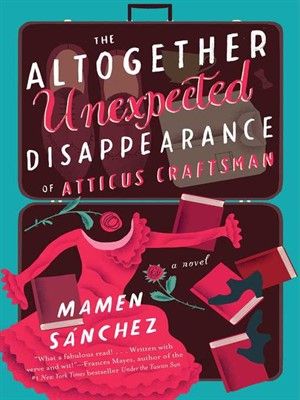 The Altogether Unexpected Disappearance of Atticus Craftman is a delightful book, warm, humorous, with plot twists galore and yet very satisfying as well. I’ve read it twice now. Last summer, I was experiencing something of a personal crisis, and although I read the book I never got around to writing up a review. When I received the paperback version unexpectedly in the mail, I was thrilled. I reread it to have it fresh in my mind, and if anything might have enjoyed it more the second time around. In short, I highly recommend this book! It is nearly perfect, except for a small sour note that I won’t even go into detail about as it will give it too much weight in your mind, and might not even bother you at all.

When the book opens, Atticus Craftsman has been missing for 6 months in Madrid, and his father has come looking for him. Craftsman Publishing is a family affair, with all family members named after famous characters in literature. Several years earlier, the company started literary magazines in several European cities. All are turning tidy profits except for the Madrid one, which is deep in the hole. Atticus is sent to shut down the magazine, close up shop, and fire the women who run it. He never travels without an electric kettle and an ample supply of Twinings tea, which he believes cures anything, and his very special mug. That sums him up right there.

The women who run the magazine, recognizing what’s about to happen, take matters into their own hands. They’re a tight-knit group (and the feminine metaphor is very appropriate), and they are determined to save their jobs. There’s the editor, Berta, a single, maternal woman in her 50s, plump and romantically-minded; there’s Asuncion, whose weight gain is due entirely to menopause and not at all to her habit of bringing in hot chocolate and croissants to team meetings; there’s Gabriela, desperately in love with her husband but just as desperate to conceive; there’s Maria, with a lazy husband and an ever-expanding brood of children who are quite often in need of day care and brought to the office; and there’s Solea, young and enchanting, with blue eyes, long seductive hair, and a tiny waist. They put their heads together and come up with a plan, one that will involve an entire village before it’s through, and cause agony on at least 2 continents and one island.

Why is this such a great book? I think because it’s got everything–mystery, romance, travel, friendship, great kisses, adventure, literature, and above all, humor. It’s full of colorful characters, from Solea’s grandmother, who rises from her deathbed when she gets what she wants, to the uptight and organized Moira Craftsman, come to look for her son, to Inspector Manchego, who enlists his boyhood friends to help him catch a thief. There’s plenty of magic realism, but it’s treated gently and humorously. I’ve been recommending it to everyone. Warning: It will make you want to travel to Spain, but is that so bad?

« The Talented Ribkins
The Hate U Give »