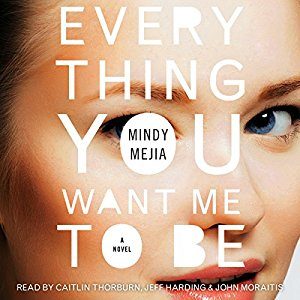 Hattie Hoffman has big dreams of leaving her small town in Minnesota and moving to New York to be an actress. She’s got the talent, shown by the different parts she plays in all aspects of her life, but her dreams will never be fulfilled after she turns up dead.

Peter Lund has moved to Pine Valley with his wife to take care of her dying mother. Peter misses the big city and hates life on the farm, but enjoys teaching high school English, especially to star student Hattie.

Sheriff Del Goodman has been best friends with Hattie’s dad, Bud, for years, and her death hits him as hard as if she were his own daughter. But he must put his personal feelings aside, deal with the nosy townspeople, and find out who killed Hattie.

Everything You Want Me to Be is told from alternating points of view of the three main characters, starting 8 months before Hattie’s death, with Peter’s move to town and Hattie starting her last year of high school. It alternates from the past to the aftermath of her death as Del follows the clues left behind. To say much more would give away too much of the plot but suffice it to say the killer isn’t revealed until the very end, though several people in Hattie’s life are suspected, including Hattie’s boyfriend Tommy, Peter, and Peter’s wife Mary.

I requested to review Mejia’s newest novel because I enjoyed her first, The Dragon Keeper so much that I added it to our 5 Star Reviews. This follow-up, 5 years later, is good, but not a whole lot different from other suspense novels where the death of a main character is revealed early on and details leading up to the death are slowly revealed. Don’t get me wrong, Everything You Want Me to Be is well written and engaging, and I felt the identity of the killer is a little out of left field based on what we know about that character, which isn’t always a bad thing. But it kept my attention and I liked the subplot of the curse of Macbeth, which Hattie was starring in before her death.

Notes on the audiobook: Each character is voiced by a different narrator, which is always a nice touch in an audio book with multiple points of view. Some pronunciations niggled at me, but overall the narrators were all easy to listen to and performed the characters well.

« What’s on Your Nightstand, February 28
Year of No Clutter »