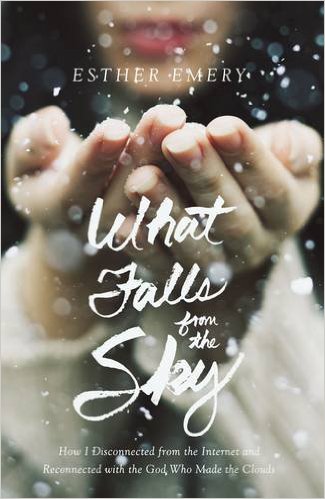 What Falls From the Sky is the most beautiful book I’ve ever seen. When I got the email pitch to review the book, the cover captivated my heart. Once I received it in person, I continued to react with joy to the cover. I don’t think of myself as a visual person, but this book cover knocks me out. The subtitle clinched it: “How I disconnected from the internet and reconnected with the God who made the clouds.” After reading it, I can attest to the accuracy of the subtitle with one caveat. Those reading it might assume it’s a spiritual memoir — and yes, that is part of Esther Emery’s story of a year without the internet, but I am afraid that will turn away readers who are not spiritual, and it shouldn’t. There are books written which are meant to persuade, but this is a memoir which exists to share one woman’s experience. There isn’t an ounce of judgement or preachiness about her choices at all. In addition to eschewing the internet, and searching for God, she also becomes a vegan. Meat-eaters wouldn’t avoid this book for that reason, and I’m urging agnostics and those who are firmly plugged in to view the book with the same open mind.

When I’ve shared with friends that I was reading and enjoying this book so much, I wanted to follow up quickly and defensively with “Don’t worry! I’m not quitting the internet, and I’m not going to start telling the world that they should quit the internet.” I’m not. That said, I think that one of the things that attracted me to Esther’s story was the knowledge that for me “trying to finish reading the internet” as she references was her practice before her experiment, never leaves me feeling satisfied. I love the internet. I love being able to connect with friends (though, as she realized, hiding behind screens can get in the way of real connection sometimes), I love the convenience of shopping online and banking online and doing research about vacations and products. Netflix streams wirelessly from wherever it comes to my TV or tablet many more hours that I might want to admit. I love the internet. Even before I read this book, I had purposed to turn it all off more and listen to music (or — okay — maybe a podcast that was also made possible by the internet) or read a real book with real words (again — possibly on an electronic device). And do you know what I found? I found space, space in my heart and in my mind and my intentions. I have made more connections with people — and yes, with my God. I have made more, better, time for myself with exercise and other hobbies. I haven’t changed much in my day, but any time I let go of the escapism of the internet just a little bit, I always discover something.

Esther Emery began this memoir and this experiment in the midst of a complete life change. She was a new mom, trying to repair a marriage, freshly relocated from west coast to east coast, experiencing a change in identity from playwright and director to stay-at-home mom. All of these changes would have resulted in some type of change — they would have to — but she maintains that to find herself, she had to shut down those faceless connections from whom she sought approval or identity or her blog, as well as the chaos that comes from that relentless stream of information. It began when she decided to cancel her cell phone, because that was also something that defined her in her previous life as a theater person. The silence was a condemnation of her new choice, so she got rid of it, and then went the next step of going dark completely.

The words inside are as beautiful as the cover, I’m happy to report. There are no forced giant a-ha moments, just this one unusual introspective year in the life of a woman. I will let her words speak for themselves: