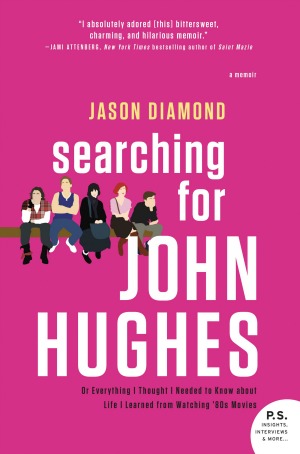 The Breakfast Club, Pretty in Pink, Sixteen Candles, Ferris Bueller’s Day Off. These titles conjur up images of 1980s teenagers and their struggles to find their voice, independence, and place in the world. These and other flicks that filmmaker John Hughes had a role in creating all definitely bear the mark of that decade, but there is also a timeless quality to their depictions of adolescence. An undeniable obsession with Hughes led Jason Diamond to write a memoir entitled Searching for John Hughes: Or Everything I Thought I Needed to Know about Life I Learned from Watching ’80s Movies, and it details his own extended adolescence and its connection to the movies he grew up watching.

Diamond’s initial quest was to write a biography of John Hughes, simply because he wanted to be a writer. He didn’t think he had a novel in him, and in the vein of the old literary adage to “write what you know”, Diamond was confident that he ‘knew’ Hughes, for he had consumed all of his films again and again. This quest turned into years of on-again, off-again writing, along with on-again, off-again confidence in his ability to fulfill this task. Diamond had difficulty securing an agent and found no publisher interested in his pitch, and he hit many brick walls in his attempts to make contact with Hughes or actors who’d worked with him.

This memoir is a book about Diamond’s attempt to write a book about John Hughes. But that simple description doesn’t do justice to what actually fleshes out Diamond’s story. In experiencing his challenges and struggles to create this unauthorized biography, he reflects upon his own childhood and adolescence growing up in the very same Chicago suburbs where Hughes placed so many of his earlier films. Diamond’s attempts at making sense of John Hughes and his films really parallels his desire to work through the traumatic experiences in his life.

Though I would find it difficult to piece together a precise timeline of Diamond’s childhood after reading his memoir, his sharing of snippets of his young life paints a sad picture of a child not cared for when he needed it most. As he writes about his research and immersion in Hughes’ films, he revisits some of his darkest times before and after his parents’ divorce, including serious physical abuse, devastating long-term emotional abuse, and eventual abandonment. Even years removed from this time in his life, the grief he felt comes through in his writing.

Diamond’s is an interesting personal narrative, filled with longing and desperation, but also a sense of hope that always returns, no matter how dark his life gets.

We’re happy to be participating in the TLC Book Tour for Searching for John Hughes.

« Two New Cookbooks–to Gift or Keep for Yourself
What Falls From the Sky, a Five-Star Read »