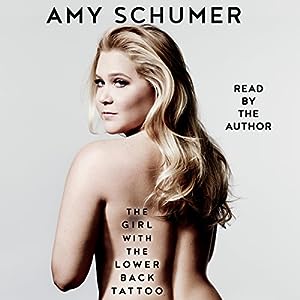 Amy Schumer is a comedian and actress, creator, writer and star of the movie Trainwreck and Comedy Central TV show Inside Amy Schumer. She’s crass, sarcastic, and very funny, and if you’re turned off by foul language or talk about sex then her book is not for you. If however, you think she’s hilarious and don’t mind a little (a lot of) vulgarity, then read on.

The Girl With the Lower Back Tattoo is Schumer’s memoir, covering her start in comedy, her parents’ divorce and her unhealthy relationship with her mother, her dating experience, including a few pro athletes and musicians who she does not name, and yes, her experiences with sex.

The book is peppered with lists – things that make her happy, things she hates – but she dives into some deeper, more serious subjects as well. The chapter about the theater shooting during a showing of Trainwreck had tears rolling down my face, and not from laughter. Her father’s struggle with Multiple Sclerosis, also covered in Trainwreck, her first sexual experience, which was not what you would call consensual, and her relationship with an abusive boyfriend are all shared in detail.

Schumer is deeply passionate about the subjects closest to her heart, especially her sister and best friend Kim. She does not apologize for her weight, which she describes as fluctuating between 145 and 2 billion, and refuses to speak for all women in Hollywood. She’s refreshingly honest about so many aspects of her life and anything not covered in other chapters is outlined in the section on things you didn’t know about her.

If you liked Trainwreck, or just like female comedians, then check out The Girl With the Lower Back Tattoo. You won’t be disappointed.

Notes on the audiobook: The audio version is read by Schumer, and while many authors don’t make good narrators, comedians reading their own memoirs are the exception, and Schumer definitely falls into this category.