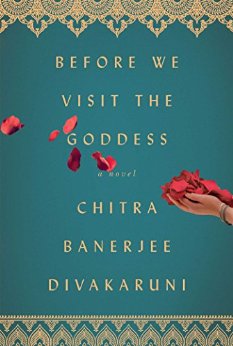 I was first introduced to Chitra Banerjee Divakaruni’s work when I read One Amazing Thing five years ago. I enjoyed her writing and characters, yet I found something lacking. I thought it was just the style of that particular novel, which read like interconnected stories, but after reading Before We Visit the Goddess, I think that is just her style. This, too, was a short novel (224 pages), and followed several people’s stories. It spanned over many decades, which gave me a feel for the characters, but it was just very sparse in detail. I don’t know that I became particularly invested in or knowledgable about any one particular character, though there are some who will stick with me.

The novel opens with Sabitri writing a letter from India to her granddaughter Tara in America. She’s never met her, but Sabitri’s daughter Bela has implored her to write to prevent her from dropping out of college, making a mistake. Trying to find just the right words brings all of Sabitri’s opportunities and missteps back to mind. She had the rare opportunity for an education many years ago but lost it. She has become successful by taking another path, but it’s clear she regrets losing out on that chance.

As she’s remembering, we also learn why perhaps Bela and Sabitri’s relationship is estranged. The novel jumps around in time a bit and moves forward in big chunks, but pieces of the story are revealed when necessary. We see the truth of Bela’s and Tara’s relationship as well, the complexities of Bela’s relationship with Sanjay, Tara’s father and the man with whom she left India before Tara was born.

This is the story of three generations of women, all flawed in their own ways, and all of whom made mistakes which altered their paths. The interesting thing is that even though they were in hard places, and everything wasn’t all rosy all the time, they each learned something and in some way overcame the hurdles that life — or their own choices — put in their paths.

While the lack of detail or fleshing out of a character’s life bothered me at times, this novel had a very strong ending that tied it together so nicely that in the end it was a very satisfying read.

« Home at Last
How to Survive a LONG Road Trip »