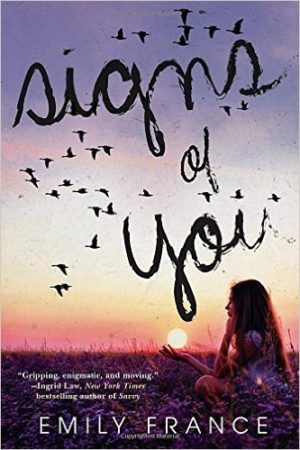 Riley’s life changed two years ago when her mom died. When she was put in a Back on Track group at her high school, she found a kinship with others in similar situations — kids who were bright and high performers until they were hit with tragedy. Jay’s dad died, and his mom has checked out. Noah’s brother committed suicide. Kate lost an aunt who was like a mother to her. Their friendship is noteworthy. They are there for each other, honest when they can be, but always there, even when they can’t talk about it.

When Riley sees her dead mom in the grocery store, she can’t tell anyone. But when Kate tells her that she’s also seen her dead aunt, she tells. They think this is happening because they tried on Jay’s dad’s religious artifact cross from St. Ignacious. This leads them to try to figure out how to make it stop, especially when they begin to see other spirits everywhere. Their research into St. Ignacious and his teachings on spiritual discernment leads them on a kind of Da Vinci Code/National Treasure type hunt.

YA novels run the gamut on content, with some being perfectly appropriate for 12 and up, and others having content (language, sexual activity and substances) that are too mature — in my opinion — for younger readers. Even though these characters are 16 years old, Signs of You by Emily France is one that I think is okay for those middle school readers, if they can handle the creepy elements.