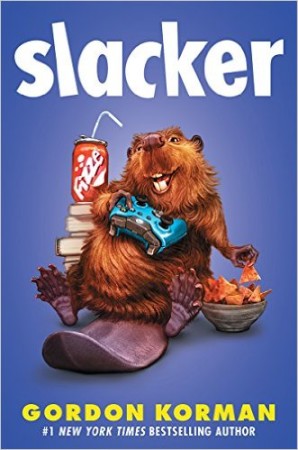 I love reading middle grade fiction. Good writers — like Korman — write well in general, but specifically in a way that feels real to his target audience. This book amused me and also warmed my heart.

Cameron Boxer spends all of his time in the basement, wearing his headset, battling in a fictional world with his friends by his side (virtually, on his headset), teaming up together to try to prevent screen name EvilMcKillPeople from besting them. According to him, it’s not just a hobby, it’s a lifestyle. When this “lifestyle” results in him practically letting the house burn down around him, his parents force him to get involved in something else. This leads to him and his friends creating a club, the Positive Action Group, just to say they did. But will this club actually change the community and the school? More importantly will it change them?

My own video-game aficionado 6th grade son had a hard time getting into this book. He didn’t like the fact that in the first nine chapters, five characters are introduced. The short chapters are told from the point of view from several characters: Cam’s two best friends, the guidance counselor, the girl who is too excited about the club, the athlete on probation who has to join the club to stay on the team, Cam’s sister. I thought it was a great way to advance the story and give readers different characters with whom they might identify.

Slacker is an original, funny, and little bit outrageous novel. The outrageous part comes from that suspension of disbelief that the book — and lots of good middle grade fiction — asks of the reader. The club grows in leaps and bounds where it quickly is populated by over 700 students. Its plot points such as that are what makes it more powerful and fun.