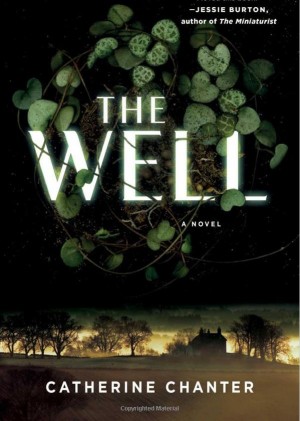 Ruth Ardlingly has just returned to her home at The Well, a farm in the English countryside. She’s under house arrest, for crimes that aren’t initially clear, guarded by soldiers, and haunted by the ghosts of her marriage that has fallen apart and the death of her beloved grandson. Ruth is under suspicion for Lucien’s death, but she can’t remember what happened the night he died.

Ruth’s days are mixed with flashbacks to her arrival at The Well with her husband, Mark, realizing his dream of owning a farm and getting away from the hustle and bustle of the city. Getting away from the scandal caused by the child pornography found on Mark’s work laptop is just another benefit of their new idyllic home. And while Ruth loves the seclusion of their farm, it doesn’t take long for the isolation to start to get to her, especially once the rest of the country realizes that the rain that falls over The Well isn’t falling anywhere else, which means Ruth and Mark aren’t suffering from the drought that’s plaguing everyone else. Shops are closing, water restrictions are everywhere, and prices of petrol are skyrocketing. Soon Ruth and Mark’s friends have stopped talking to them and reporters are camping out outside their property.

Things start to look up when their daughter, Angie, and Lucien arrive with a band of travelers. Angie has had a difficult relationship with her parents due to her wild teen years and drug problem, but she seems to have turned things around. And Ruth always loves having Lucien nearby, having taken him in in the past when Angie couldn’t care for him. But when a group of nuns calling themselves the Sisters of the Rose of Jericho come to The Well, Ruth feels a kinship with them, and their leader, Sister Amelia, calls her the Chosen One because she believes’s Ruth’s presence at The Well is the reason for the rain. As Ruth becomes more involved with the Sisters, she grows farther apart from Mark, who is determined to stay at The Well even though their trips into town result in assaults from the townspeople and the government is threatening to take over the property.

The Well is paced well, and the flashbacks mixed with Ruth’s present day provide a good back-and-forth that move the story along. It did bother me that it’s never really explained why The Well gets so much rain. England seems to be closed off from the rest of the world, with no help from other countries during the drought. And the resolution of the drought seems rushed, serving only to close the story.

The Well was recently named one of Entertainment Weekly’s 10 Great Summer Thrillers, and it’s a good pick. Author Catherine Chanter keeps the reader guessing as to who killed Lucien and the circumstances of the murder. I recommend this novel as an entertaining summer read.

Notes on the audiobook: Simon & Schuster Audio always has such great features on their audio books, and The Well includes a video of the author discussing her debut novel as well as an excerpt. Narrator Nicola Barber is easy to listen to and keeps the listener engaged with the story.

« Shakespeare Basics for Grown-Ups: Everything You Need to Know About the Bard
Modern Romance by Aziz Ansari »