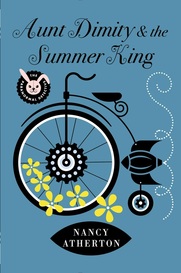 As summer approaches in the tiny English village of Finch, all is not well – at least not in the mind of Lori Shepherd. She’s finally starting to turn her eyes outside her small family and her brand new baby daughter and is not pleased with what she’s finding in Aunt Dimity and the Summer King by Nancy Atherton.

This is the twentieth installation in the Aunt Dimity series where Lori comes across little mysteries that she solves with the help of her Aunt Dimity – her deceased mother’s friend who communicates with Lori via a diary. That facet alone should give a clue that this may not be a hard core mystery series.

The big problem this time around is that the village of Finch has two properties that Lori decides haven’t been sold or rented fast enough for her tastes. This is the first Aunt Dimity novel that I’ve read, and I had to admit that I found Lori a bit grating. The leaps in thought that she makes and the impetuous actions and assumptions she makes are immature.

The cottages aren’t being rented fast enough? It must be a big business scheme to drive up the prices of the cottages and turn it into a weekend destination. Of course. And Lori goes after each of those she feels may be involved, greatly overstepping her bounds in many cases. Of course, that’s also part of the charm of the book.

Lori also meets a mysterious neighbor of her father in law, Arthur Hargreaves who is the self-appointed Summer King. He repairs the wheel on her pram and appears to be a quirky but wonderful little man. The more Lori learns from other sources, the more she suspects he may not be as he appears, and she adds this to her list of mysteries she must solve.

The book is cute. And it’s a very quick read. I found myself rolling my eyes a bit at Lori’s overenthusiastic reactions to every perceived injustice in her adopted hometown of Finch, but this was a nice light read that would be a great pool book.

Written by Michelle of Honest & Truly! who wishes she lived in the English countryside. See the slices of life – in the suburbs of Chicago – she shares on her blog Honest & Truly! and follow along with her on Twitter where she is also @HonestAndTruly.

« The Cherry Harvest
Blueprints by Barbara Delinsky with special #giveaway »