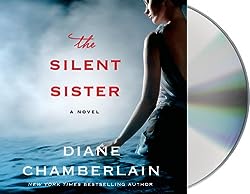 Macmillan Audio often sends me audio books they think I’ll like — sometimes they’re right, sometimes they’re not. But when I received Diane Chamberlain‘s latest novel, The Silent Sister, they were definitely right. This was the fourth book by Chamberlain that I read and reviewed, and I think it’s my favorite so far. She has a way of creating these wonderfully intricate and compelling stories that often don’t work themselves out fully until the novel’s completion. It’s pretty telling that I gave all four books 4 stars on Goodreads.

Riley MacPherson has the daunting task of cleaning out her father’s house and belongings after his death. Having recently broken up with her boyfriend who was clearly never going to leave his wife, and with the summer off thanks to her job as a middle school counselor, Riley moves into his house and enlists the aid of Jeanne Lyons, her mother’s close friend, to get the house ready to sell. While going through her father’s papers, she discovers that her sister, Lisa, did not commit suicide as Riley’s always been told, but faked her death to avoid standing trial for the murder of Lisa’s violin teacher.

Having lost her mother to cancer years earlier, and with her brother Danny distant and suffering from PTSD after a tour in Iraq, Riley is desperate for a family connection and digs into Lisa’s disappearance. She finds a lot of unanswered questions along the way — why did her father leave his valuable pipe collection to Tom and Verneese Kyle, an older couple that he didn’t even like? Why is Verneese insisting that Riley was adopted? And if Lisa really did fake her death, why has she never reached out to Riley?

Lisa’s story is also told, starting from the day she fakes her suicide, following her as she finds a place to live in San Diego, gets a job, and decides to go to college. Exiled from her family and fearing capture daily, she also greatly misses playing the violin, but finds comfort in a woman named Celia.

The Silent Sister is a page-turner that’s full of suspense and twists, some more easily guessed than others. The emotional turmoil that Riley suffers is painful to read as she discovers more and more lies intended to protect her. Lisa goes from fearing for her life to realizing she can have a future, telling only Celia the truth about what happened with her teacher.

Notes on the audiobook: Susan Bennett does an excellent job reading this novel. She is enjoyable to listen to and had me finding excuses to continue listening. I never found myself drifting, which is always a possibility with audio books.