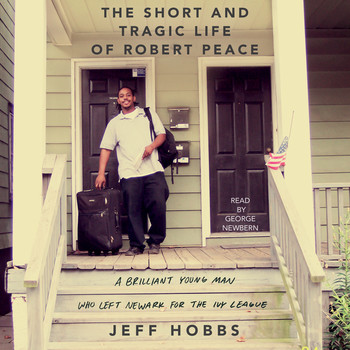 I love a good biography or memoir. I’ve also come to enjoy books that explore the sociology of someone’s life: the social and economic and geographic factors that play a role in developing someone into the person he becomes.

The Short and Tragic Life of Robert Peace: A Brilliant Young Man Who Left Newark for the Ivy League is a book which lives in those areas. The combination of all these genres with an interesting story made this book a winner for me.

Robert Peace grew up in Newark, the son of a hard-working mother and a very intelligent father who dealt drugs and ended up in prison from the time Rob was a young boy. He had been close to his father, and they tried to maintain a relationship with regular visitation.

Rob’s mother saw that he took after his father with his quick mind and was determined to do anything she could to make sure he got a better education than the public schools offered. She also knew that by sending him out of the neighborhood, he stood a better chance of making it out of the neighborhood lifestyle that his father and so many of the other men and boys chose to pursue.

It worked to a degree. Rob excelled academically, but still ended up smoking and drinking on the stoop with his father’s friends. Due to his exceptional work and promise in school, a private benefactor offered to fund his college tuition. He ended up at Yale. Going from Newark, which had come to be the murder capital of the world during his youth, to Yale, where he was now surrounded by people of privilege, was a bit of an uncomfortable stretch.

One of those people of privilege was his first roommate Jeff Hobbs, the author of this book. Ron’s lifestyle and story intrigued him from the beginning, as did Robert’s general one-half, wise and supportive demeanor. But Rob stood apart by choice, finding it hard to identify with the student body as a whole, befriending cafeteria workers and smoking pot with other New Haven locals instead.

The subtitle gives away the short end to his life, and the book tells the story of the tragedy. My feelings swayed between compassion for Rob and the background he sort of overcame yet chose not to leave behind. Why did he not grab hold to the life offered with gusto? What was responsible for his inability to move on past graduation successfully? Was it something in him that would be present regardless of social and economic obstacles, or was it that his birth had already determined his outcome? These are questions worth pondering in our society, and it is a tragic thought indeed.

I’ve listened to several books narrated by George Newbern (see below for a few), and I enjoy them. He balanced the narrative style of this book which were told in a more conversational/confessional tone with the sociological conditions which were explained in a more newslike way.

You can listen to a sample at the Simon & Schuster audio page.