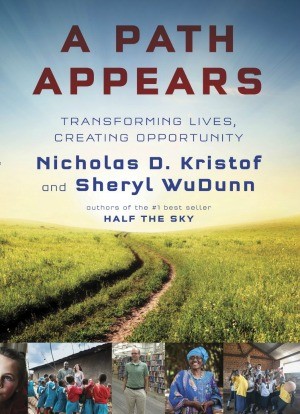 Anyone who cares about what’s going on in the world can’t help but be discouraged sometimes. It’s not just the headline-grabbing stuff. Stories about poverty-stricken communities and ongoing ignorance that contributes to them, whether they be in underdeveloped countries or in our own backyard, can feel overwhelming. Journalists Nicholas Kristof and Sheryl WuDunn have good news though. In their latest book, they’ve compiled an impressive amount of stories showing that individuals can and do make a big difference, and that even big problems don’t need to be insurmountable.

Although A Path Appears

is a bit textbook-like in structure, the stories it contains are inspiring. From personal accounts of seeing the results of a break down in the American system, personified in a neighbour child being raised by grandparents after being born to a teenage meth-addict, to an inspiration like Lester Strong, who was told he was retarded and would never graduate and thanks to mentors, went on to become a National Merit Scholar and establish a network of mentors to help other children, there are many stories from which to learn. The stories are global–there are plenty of stories about Americans, even Oregonians (Nicholas grew up here), but also plenty of stories from just about every continent.

The book showcases many individuals who are making a difference by using their own talents, skills and backgrounds in creative ways. The case studies show clearly that where time and attention are paid to people as individuals facing specific problems, results are achievable.

Many are familiar with the authors from their previous book, Half the Sky

(which I loved), which proved empirically how empowering girls and women can make huge differences in the fight against global poverty and lack of development. Nicholas Kristof is also an award-winning columnist for the NY Times, and readers know of his ongoing concerns for those less-fortunate.

Although A Path Appears was published in October, it continues to have a lasting impression, especially on the lives of those trying to impact their world for good. A highly important book that manages to both inspire and encourage!