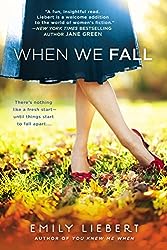 Allison Parker has just moved back home to the suburbs of New York City with her 10 year old son in tow. On Logan’s first day of school, she runs into Charlie Crane, an old friend from her childhood who knew her husband, who was killed on a ski trip 10 years earlier. Charlie’s wife, Charlotte, invites Allison to a wine and whine with some other friends, women who personify the term Queen Bees and aren’t particularly welcoming to Allison.

Charlie and Charlotte’s marriage is shaky — they’ve grown apart and neither one knows how to fix it. Charlie uses work as an excuse to not come home and it’s easy to understand why since Charlotte gripes at him when he his home. Allison finds herself torn between the two of them, caught in the middle of an old friend and a new one, while also growing a friendship with Elizabeth, Charlotte’s needy and demanding sister.

Allison has been unable to move on since her husband’s death, but when she hits it off with a high school classmate she barely remembers, she wonders if it could be possible to love again.

While I enjoyed the story in When We Fall, I wasn’t too fond of the characters. Allison is almost too perfect, described as gorgeous and slim, always showing up at the right time and knowing just what to say. It seems a little unlikely that she’s never dated or even looked at another man in the 10 years since her husband’s death. Charlotte is too quick to listen to others’ opinions and her refusal to eat a bite of food that’s not salad is just annoying. Charlie is whiny and a bit of a bully to Charlotte and their daughter, spilling all of his problems with Charlotte to Allison without a thought to what his wife might think of that. He appears to have a bit of a crush on Allison, though he never admits it. Sabrina, Charlotte’s so-called best friend, is catty and a caricature. The only character I liked was Elizabeth, and that was only once she emerges as her own personality without Charlotte around.

All that being said, I still recommend When We Fall as a good, quick women’s fiction read, the type of book to read over coffee or while waiting in the carpool lane.