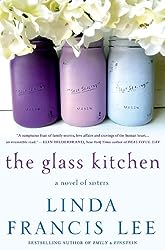 A few years ago, there was a book on the bestseller list about a girl who could sense emotions in the food she ate that was prepared by others. I loved the premise, but unfortunately the execution fell short and it lost focus about halfway through. The Glass Kitchen has a similar premise but much better execution with a satisfying conclusion.

Portia first experiences the knowing as a child when she wakes up craving peaches and blueberries, a favorite dish of her sister Olivia’s. Unbeknownst to her, Olivia’s gone missing, and when their mother sees what Portia’s eating, she knows exactly where to find Olivia. The knowing is a family trait and Portia is brought straight to her grandmother, who owns a restaurant called The Glass Kitchen, where she sits at a table and holds court with customers, giving out advice and making food recommendations. When Portia’s parents are killed, she and her sisters move in with Gram, with the promise that Portia will learn about the knowing. And while she learns the basics of cooking, she never gets lessons on the knowing, instead honing the skill by herself. When Portia falls for a state senator who calls her knowing unnatural and wants her to be normal, she suppresses her gift in order to please him and to prevent further tragedies — Gram is killed after a meal Portia makes for her — from occurring due to the knowing.

Three years later, Portia is newly divorced and living in the NYC townhouse that was left to her and her sisters by their great-aunt. When Portia meets the man who has purchased her sisters’ apartments in the townhouse, she gets the overwhelming need to make him a specific meal. Gabriel Kane lives upstairs from Portia with his 2 daughters, having moved from New Jersey after the death of his wife. Desperate for money, as Robert has left her with nothing, Portia takes a job cooking for Gabriel and his daughters, and is determined not to get caught up in their family issues. Older daughter Miranda is acting out, making friends with a bad crowd and defying her father’s rules. 12-year-old Ariel is a good girl but feels invisible, breaking minor rules in order to just get noticed.

Portia’s knowing slowly returns, and she decides to give in and use her gift without fighting it. Her sisters decide to open a Glass Kitchen in NYC, but they need to find investors, and as Gabriel repeatedly reminds her, 80% of restaurants fail in the first year.

Intertwined with Portia’s narration is that of Ariel. She misses her mother, is upset by her father’s and sister’s constant fighting, and when she has to do a report on her family, discovers some pretty big secrets. Ariel also has to deal with the guilt she feels for surviving the accident that killed her mother, refusing to talk to the Shrink (her term) her father insists she see, protecting her own secrets around the cause of the accident.

The sections of The Glass Kitchen are broken up by course, with the recipe for each dish included in the back of the book. It’s a story of being true to yourself, trusting your loved ones, standing up for what you believe in, and realizing that “some things are true whether you believe them or not.” It’s full of characters that make up a well-rounded book — quirky, unlikable, sexy, honest, even bratty. I loved this book and recommend it to those who like romance, magical realism, and food.

Nancy is a big fan of romance, magical realism, and of course, food. She writes about her boys, books and life in Colorado at Life With My Boys and Books.