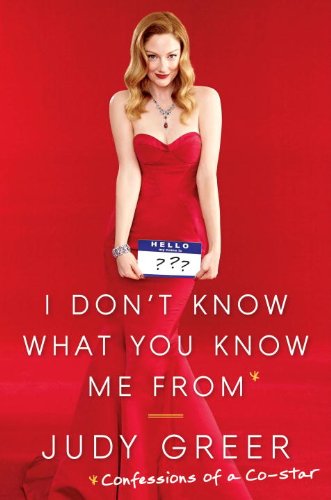 I enjoyed Judy’s Greer’s memoir I Don’t Know What You Know Me From: Confessions of a Co-Star so very much.

I had just finished reading a fairly heavy book when I picked this one up, which probably enhanced my enjoyment. It was just what I needed. This book made me laugh a lot.

Judy Greer writes with honesty about the start of her career and her continued success as the less-pretty, less-fabulous sidekick. She doesn’t kiss and tell, she doesn’t do too much navel-gazing that makes some memoir unpalatable, but what she does is give a glimpse into what it’s like to be a working actress in Hollywood, while also sharing her thoughts on friendship, beauty rituals, love, and step-families.

When discussing her parents’ need to find a “thing” for her (it ended up being dance, which led to musical theater and then acting), she says

Now that I’m a stepparent, I can imagine the stress my lack of a thing caused my parents. I mean, when people ask you about you kids, what do you say if they don’t have a thing? “Sally is such a mellow girl; she is happy just lying on the sofa for hours.” Or “Doug was so cute watching TV all night last night.” No parent really wants to say that. You want to say, “Abe hit a home run at Little League last weekend.” “Bob rescued all the hostages in Call of Duty last night” just doesn’t cut it (page 27).

I’ve done some movie coverage and attended some press junkets, so I loved hearing the perspective of the actress on the other side of the roundtable. She also shares fun stories about filming on location, paparazzi and more, like this unique fact.

In the introduction to the chapter called “Celebrities I’ve Peed Next To,” she explains that “there’s something so humanizing about bodily functions. I think it’s what really levels the playing field. I have peed next to some very A-list celebrities, and every time I hear the tinkle of celebrity pee, I giggle” (page 105).

She’s just a girl like me, not any sort of expert on the things she mentions, but for whatever reason Judy Greer’s memoir hit just the right note. It is perfect light vacation reading.

As some memoirists do, and as one assumes many in Hollywood do, Greer speaks candidly and is free with her adult adjectives.

« Hidden Like Anne Frank: 14 True Stories of Survival
Why Adults,Teens, and John Green are excited about The Fault in Stars movie #TFIOS »