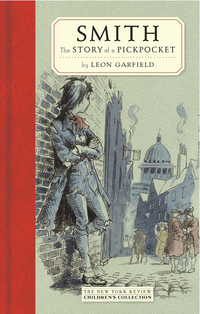 As you step back in time into the eighteenth century with Leon Garfield in his Smith: The Story of a Pickpocket, you feel the poverty and overwhelming depression that is the heart of London. Smith lives with his two sisters who take in clothes of those who have been executed to sew into clothes that fit new owners, while Smith is the eponymous pickpocket.

The book feels like Dickens for a younger set, although I don’t know that I’d quite gain the interest of my ten year old to read this. It’s dark, which isn’t a problem, but the verbiage is dense – much more so than novels written today. I was surprised to learn it was only first published in 1967, as it has the feel of a much older generation. Though it is marketed as a children’s book, the story is definitely one that is engaging for adults, as well.

Twelve year old Smith is engaged in his profession, following a mark down the alleys and streets of London until he sees his chance to lighten his fat purse. Immediately after Smith succeeds in picking his pocket, the man is set upon by two men in brown who murdered him and commenced searching his person for something they didn’t find, as Smith had gotten there first.

Smith discovers that all this is over a document, and of course he can’t read – nor can his sisters. They see the document as their ticket out of poverty, however. Smith trusts no one, as his life has taught him the danger in any trust, so he decides to learn to read himself to be able to decipher the importance of the document. Heading to Newgate Jail where he frequently runs errands for those imprisoned – many of whom are moderately educated – Smith fails to find a tutor.

The bookseller also refuses to help, and when Smith returns home, his sister’s beau Lord Tom – a highwayman, of course – offers to take care of the document, but again Smith refuses. As he leaves the tavern he calls home, he’s followed by the two men in brown who have discovered who got to the murdered man before they did. Smith manages to lead them on a merry chase before losing them.

On his way home, he runs into a blind magistrate who reminds him of the murdered man. Some remote portion of his heart is awakened with pity, and he leads the magistrate home and soon becomes a pet in the household, even being taught to read. The men in brown remain after Smith, however, and the document is far more coveted, though for different reasons, than he ever imagined.

As Smith goes from pampered pet to being jailed for the murder of the barrister he witnessed and beyond, Smith is challenged by his lack of trust to learn who is there to help him if only he’ll open up. Smith doesn’t always make the best choices, and it’s easy to see why. The book unfolds with many twists and turns and entertaining characters on every page from the daughter of the blind magistrate to the man with whom Smith shares are fireplace in Newgate Jail to Lord Tom and more.

The book is a pleasant read, and yes, it does feel like Dickens throughout. It’s an old-fashioned book and proudly so. This is a classic, just back in print, for a reason. And perhaps this will be the next book we read aloud at bedtime with the wee ones where we can talk about it together, as some of the themes of death and the realities of eighteenth century London aren’t ones I want the wee ones to explore on their own.

Written by Michelle who loves historical fiction and always has, starting with the Betsy, Tacy, and Tib books she read as a child. See the history she’s creating and recording for the wee ones on her own blog Honest & Truly! and follow along with her on Twitter where she is also @HonestAndTruly.

« My interview with #CatchingFire cast: Finnick, Johanna, Betee, Gloss and Cashmere #Giveaway
We Are Water by Wally Lamb »