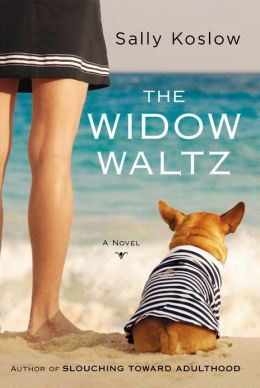 Ben Silver is the man everyone loved. He was a successful lawyer in New York who got along with everyone, donated to charity, was kind to restaurant waiters and the like. When he passes away in the first chapter of The Widow Waltz  by Sally Koslow, his wife and two daughters are understandably devastated. The daughters come home to stay with their mom in the aftermath, which includes a will reading that becomes a shock that reverberates as Georgia Silver realizes that she’s essentially destitute though she has faith that her lawyer will ferret out her husband’s missing money.

I will admit that it’s hard for me to sympathize with Georgia at the beginning of the book. She lives in such a rarefied world of drivers in New York City and summer houses and more that I never even dream of. She seems spoiled and cosseted to me, having no idea of her family’s finances and raising two daughters who have no sense of work ethic. That changes as the book goes on and Georgia determinedly finds a way to muddle through her new widowhood.

Her daughters, Luey and Cola (short for Louisa and Nicola, respectively – nicknames that pained me to read each time I saw them because who would do that to a child?) were more intriguing to me. Both have drifted with no sense of purpose in life, Nicola from working in Iowa to a culinary course in Paris and more, Louisa simply drifting through and dropping out of Stanford. That said, they are more vibrant and fragile, partly due to their age. They both have their own demons, and it’s a pleasure to see them grow as the book develops.

As Georgia comes to the realization that Wally, her lawyer with a crush on her, isn’t going to find the money and that her husband has secrets he’s been keeping from her, she buckles down and figures out her plan. It isn’t easy, as she has to sell a good portion of her life, but she refuses to ask her brother for money or sit helplessly by as creditors emerge. She also starts to dig into her husband’s life to understand how this could have happened, discovering discrepancies in what he’s told her along the way.

The book was an enjoyable read with characters who truly grew on me, although I still cringe at the Luey and Cola names. While the characters don’t all make the choices I would have, I learned to like and accept them. I wouldn’t quite classify this as a beach read, although it went quickly once I got into the book. The characters who started out flighty and shallow grew and developed and found their own solutions to issues they faced, coming together as a family in a beautiful way.

Written by Michelle who can only hope that her children will flock to her when they are adults. She what she’s up to in the meantime via her blog Honest & Truly! or follow along with her on Twitter where she is also @HonestAndTruly.