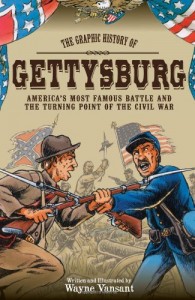 The wee ones have gotten really into graphic novels over the past year or so. And they’re nothing like the ones I used to read growing up. There are some deep topics and great stories, including some classic literature that has been brought to this visual (and easier to understand for younger readers, perhaps?) medium. Gettysburg: The Graphic History of America’s Most Famous Battle and the Turning Point of The Civil War by Wayne Vansant is a perfect example of this.

When the Gettysburg graphic novel arrived, Mister Man picked it up and walked away. He promised my mom that they were going to read it together, but the next day he apologized because he’d read the whole thing already. He loved it, and he continues to pick it up to read through it again because it appeals to him.

Finally I had my turn to read it, and it was fascinating. The graphic novel follows the three days of the Battle of Gettysburg, including the lead up to the long battle and finishes with the dedication of the soldier’s national cemetery at Gettysburg and the text of Lincoln’s famous address. The detail included in the graphic novel is far more than I ever learned about the Battle of Gettysburg – including in my AP history classes. It is a lot to absorb, and I probably need to read it a few more times to fully follow who was where when and why, but that didn’t stop me from getting the majority of the information in it.

I appreciated the laying out of the command for both union and confederate forces, especially where it changed over time. There was so much in the book that showed how the Battle of Gettysberg should never have occurred had everyone followed orders and how some decisions could potentially have changed the course of the battle, though there is no “but maybe” in the book.

Throughout the book, there were little details from a 72 year old in Gettysburg who joined the union forces to the different kinds of ammunition used in a cannon at the time. It was fascinating to read about the little minutiae that isn’t necessarily critical to history books but still fascinating facts about the times and what happened. At the conclusion of the book, there is a brief follow up on many of the people most history books have forgotten from the husband identified by the photo of his children found with his body to a myth about opposing commanders meeting after the war, both believing the other dead.

Those are the little tricks that made the book fun and kept it light. It was age appropriate for my nine year old (who is a high level reader) for the most part. The only thing I wish could have changed was the repeated use of the word “damn” and “damned” in the book, although it does explain why my nine year old talked about his “damned slippers” the other day, a phrase he’s never heard from my husband or me.

Michelle loves pretending to be a student of history, though only in a most cursory sense. She’s too focused on living her life and raising her children, as evidenced by her blog Honest & Truly!  You can also see what she’s up to by following her on Twitter where she is also @HonestAndTruly.