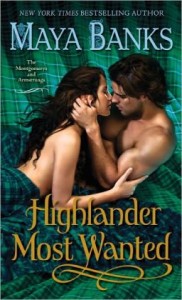 Spring has officially arrived, not just in name but actually – dare I say it? – in weather, too. For me, that means I tend to read lighter books, as I spend a lot of time outside supervising the wee ones as they ride bikes or play tag or hide and go seek outside. I want something that will keep me interested but not so deep that I can’t put it down or remember the characters when I am finally able to pick it back up again. Highlander Most Wanted by Maya Banks fits that model perfectly for me.

I enjoy historical fiction, especially that set in England and Scotland. I am not looking for all the steamy sex scenes or heavy romance, but something that has a romantic aspect to it with a larger story behind it that has a solid plot. Highlander Most Wanted works well for my needs. It is another novel in The Montgomerys and Armstrongs series, following Never Seduce a Scot.

While the books all feature the McCabe men in Scotland, it isn’t necessary to have read the previous books, as each one stands on its own. I had read Never Seduce a Scot, but not the other novels. Highlander Most Wanted picks up immediately following the previous book with many of the same characters, but it has its own plot that simply follows the conclusion of the previous book.

Genevieve McInnis was on her way to her betrothed’s castle a year previous to be wed when Ian McHugh attacks the traveling party and kills all but her, kidnapping her and bringing her to his castle, holding her unwillingly after she had rebuffed his interest at Court. Her family has assumed she’s dead, and the McHughs don’t aid her in any way, calling her names and treating her horribly during her captivity.

When the Montgomerys and Armstrongs come to the McHugh keep to take back Eveline Montgomery (formerly Armstrong) whom Ian had also kidnapped, Genevieve is the one to tell them where to find her after Patrick – Ian’s father – denies that she is there, along with the other McHughs, a story taking place in the previous book but alluded to in Highlander Most Wanted.

Now that Bowen Mongtomery has taken possession of the keep for his brother, Graeme, who now claims the keep after rescuing his bride. The Montgomerys and Armstrongs continue to find a way to work together to find a more peaceable truce after ending their long blood feud in the previous book, as they determine what to do with the keep and its occupants, along with searching for Patrick who has fled before they arrived.

Ian – killed in the previous book – has scarred Genevieve, marring her beauty and creating a victim’s personality, yet she is the only one who is helping the new rulers of the McHugh clan, facing reality as no one else is. Bowen is drawn to her, but there are plenty of secrets that have yet to be uncovered and answered before a true romance can blossom.

Michelle wishes she were enjoying a Highland spring, but is content to finally be able to sit outside in Chicago comfortably. See what she’s spending her time doing now that winter has finally loosened its hold by checking in on her blog Honest & Truly! and following along with her on Twitter where she is also @HonestAndTruly.

« While We Were Watching Downton Abbey
And Then She Fell »