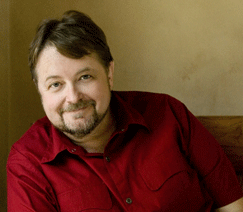 I met with author Luis Urrea last month before a book talk he did at Brazos Bookstore in Houston. I talked with him a bit about the independent bookstore (fitting, because we were sitting in one), because it was something that had been on my mind (read his and my thoughts in Do We Need Independent Bookstores?).

Urrea is such an interesting person, the son of a Tijuanan father and American mother (and the grandson of a Mexican woman and an Irish man). I think he felt at home in the Tex-Mex city of Houston, liberally sprinkling his talk with Spanish phrases and good-natured humor about his heritage. He didn’t find out about his great-aunt Teresa, upon whom these novels are based, until he met some distant cousins. Having a known healer in the family made his colorful family even more interesting, and upon learning about her, he spent over 20 years researching and writing.

At his author talk I sat with others who gathered to hear him on his book tour in honor of the paperback release of Queen of America (linked to Dawn’s review). He said when he first submitted a draft of The Hummingbird’s Daughter (book 1 of Teresa’s story), the editor suggested that he take out some of the magical additions, to make a stronger historical novel. Urrea said, “The miracles happened. They are all documented and seen. The ‘real stuff’ like what her bedroom looked like is what was made up. The ‘magical realism’ is what really happened.”

He also talked a bit about a possible movie adaptation of Terese’s story, which might have Antonio Banderas attached to it. He’s read the screenplay, and he likes it. I loved his description of it: “They took 700 pages and made it into a 100 page poem.” You can follow Luis Urrea on Facebook to keep up to date about that and more.