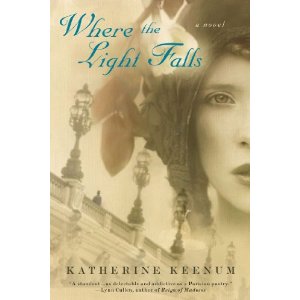 Jeanette Palmer knows she’ll get into trouble when she helps a fellow student elope from Vassar College with a young man considered unsuitable by the bride’s family. But she doesn’t expect to actually get expelled. At first she’s devastated, but she manages to talk her family into letting her go to Paris to study art, as long as she’s chaperoned by her middle-aged Cousin Effie, a spinster since her one true love was killed in the Civil War.

The two arrive, find a suitable pension, and enroll Jeanette in art school. They begin to make friends with other single women artists, some with male chaperones (brothers, husbands) and some there alone. We are offered a glimpse into Paris of that era, with its dingy attics that were too hot in summer and freezing in winter, its crooked and dirty alleyways, its quartiers that are now trendy and expensive but then were considered on the outskirts of town and very accessible to those of limited means. We see women beginning to make their way as serious artists, and the prejudices they  face as such. We see the temptations that befall them, to cheapen their work into sketches for money, to turn to the easy out of drug use to face difficult situations.

Where the Light Falls offers a tantalizing glimpse into Europe of the times. Check out the rest of my review, and enter for a chance to win a copy of your own, over at 5 Minutes for Mom.