When I opened the first package of books I received from Jennifer, one piqued my interest immediately. Payback (The Secret Life Samantha McGregor, Book 4) by Melody Carlson seemed to be a book I could quickly devour. My instincts were right. 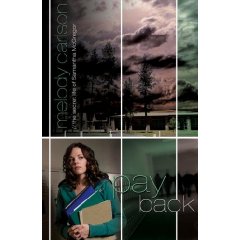 In this fourth and final installment of the teen series, high school student Samantha McGregor is helping local detectives as they try to stop what they believe will be a terrorist attack. Why are the police seeking help from a teenager? Samantha has visions and dreams from God. In fact, Samantha has already seen the impending attack in vivid detail and shared the information with her friend, Detective Ebony Hamilton.

Samantha and Ebony race to put together the pieces of the puzzle before lives are lost. Sam tries to focus on what the Lord is trying to show her. It’s not such an easy task. She’s worried about her mother’s new too-good-to-be-true boyfriend, and how she can keep stalling her boyfriend while she goes undercover. I was hooked on trying to decipher Samantha’s visions along with her, and couldn’t put the book down.

I enjoyed Payback so much, I started reading the other books in the series. I just finished the first book, Bad Connection, which did not disappoint. Samantha and Ebony work on their first case together, trying to find one of Samantha’s friends who’s gone missing, while Samantha’s family starts to crumble around her.

Samantha’s gift could open a theological debate about visions and dreams, as well as those who claim to have them. However, Carlson sets the record straight from the beginning, with a letter to her readers explaining that her novel is

Carlson includes Scripture throughout the storylines, to encourage her readers to seek the truth from God’s Word. Samantha herself wrestles with doubt about her gift, and learns she must draw continue to rely on God as she works to solve each case. Carlson also includes discussion guides with thought-provoking questions aimed to spark meaningful dialogue, and some resources for those wanting to know more about hearing God’s voice.

Bravo to Melody Carlson for giving us a fiction series that goes beyond today’s typical teen fare.

Melissa has been captivated by books for as long as she can remember. She resides in Virginia, and at Breath of Life.

« On Reading — Vacation
Join Our Community »