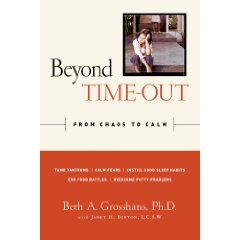 As a mother of a 1 1/2 year old, I was curious to hear what Dr. Brosshans had to say about child discipline. I was intrigued by the premise of the book where she argues that kids these days are simply out-of-control. She argues that the “time-out method” that parents have been using for the past two decades to keep their kids in line has not worked. Her idea is: less focus on self-esteem and more emphasis on obedience. How many people can really argue against that?!

I agree with her that parents have been giving their children more free reign to do as they please in the past few years. I don’t know if the reason for that is that parents fear what will happen if they discipline their children in the way that they think they ought or if they just truly do not know how to discipline. I’m certain there are many factors involved. I have my opinions but since I’m not an expert, I’ll refrain from sharing them.

In short, I found the first half of this book immensely helpful and educational. I’d recommend the first half heartily to anyone who is a parent or who is thinking about becoming one. She breaks down the four parent personality types which create unruly children: the pleaser (the parent who appeals to their children’s emotions to get them to behave), the push-over (the one who is pretty much steamrolled over and gives up on disciplining because it seems so hard), the forcer (the one who responds in anger when the child does not obey) and the outlier (the one who is involved in their child’s life in every way EXCEPT emotionally which allows for a subtle dysfunctions). Very intriguing and I think Grosshans did a superb job at narrowing the field of parental personalities down. She encourages parents of disobedient children to stop blaming the children but to look inward and determine what it is that they are doing wrong. In this way, the parent can readjust their thinking and habits and correctly address the issues which their children raise. Again, most excellent. I agree with her assessment of the problem.

I didn’t like the second half of the book quite so much. Grosshans spent the second half arguing for a particular approach to carrying out discipline. Basically she argues for time-out (contrary to what the book title would suggest) but with a different attitude and mindset towards it. It’s all well and good, but I think you have to really agree with the time-out form of discipline to appreciate everything she has to say.

One extreme objection I have to the book is her introduction to her arguments in which she makes the statement: “Love alone is not sufficient (in raising a child).” (Page 15) My, perhaps petty argument is that that particular statement is untrue. Love alone IS sufficient. It is learning how to apply the love in good times and in bad that raises mature, responsible adults. She uses the word “power” when referencing the struggles between parents and children. Her argument is that kids currently have the power but the balance of it needs to be returned to the parents. I would argue that the issue is not so much over a power struggle, but a true understanding of authority. We are all under an authority of some type. It is learning to teach of it, respect it and grow up under it that produces those wonderful children that we know it is possible to have. There. That’s my word quibble for the day.

On the whole I’d recommend Beyond Time Out, particularly because I found the first half so fascinating and informative. Typically I prefer to read books on child raising written from a Christian perspective. However, Brosshans has good information to share, regardless. It’s worth reading about it.

« On Reading: Word Traveler
If I’d Known Then »