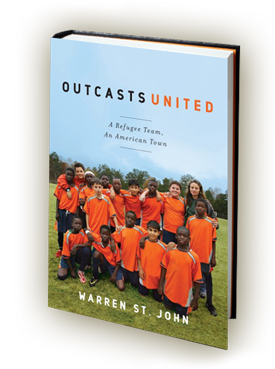 Outcasts United: A Refugee Team, an American Town is the story of a soccer team made up of refugees living in small town Clarkston, Georgia, as told by the New York Times journalist Warren St. John.

The book documents the struggle between the town and the large influx of refugee inhabitants, and tells the story of how the coach, Luma Mufleh worked tirelessly to help these boys transition into American culture, by giving them a taste of home on the soccer field, along with moral support of their families, and tutoring to help them stay on track in school.

The team tutor is quoted as saying that people put Luma on a pedestal for the way she’s reached these kids and their families, and she thinks that’s the wrong attitude. She said, “One person can’t do everything. But everyone can do something.”

I don’t know that it was an implicit plan of the author, but after reading about the refugees, I did feel as if I’ve been changed — not only enlightened about their plight, but moved to want to help in some way. Whether or not I actually follow through is not the author’s fault, but the book did move me to do something.

If you liked Three Cups of Tea, you’ll definitely like this book. If — like me — you liked the idea but thought that the actual execution was a bit boring, then I’d definitely recommend Outcasts United.

Comparisons are inevitable since they are both written by journalists and feature profiles of people who are doing wonderful things. However, I think that Outcasts United has more heart, and it flows better. St. John explores the many issues of a small town being forced to accept the refugees, and introduces the many characters effortlessly. Author St. John reports mostly with a journalist’s lack of bias, but inserts just enough personal insight into the story to add to his telling of the story, without letting himself become the story.

Read more about the book and the story behind it at the Outcasts United website.

Managing Editor Jennifer Donovan blogs at Snapshot about life with her tween daughter and preschool-aged son.