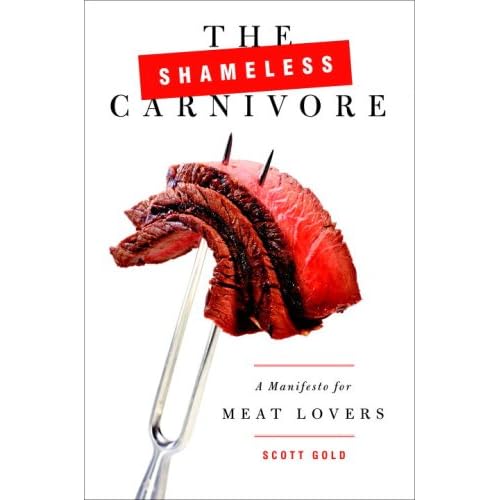 Thanks to the wonders of the internet, most of the books I read come from recommendations on blogs like this one, Goodreads and bookseller newsletters. But once in a while, a book on display at the library catches my eye. The picture of a fork with 3 beautiful slices of steak called me to the shelf. The title, The Shameless Carnivore: A Manifesto for Meat Lovers, made me pick it up. But the description on the jacket: “The Shameless Carnivore explores the complexities surrounding the choice to eat meat as well as its myriad pleasures” is what sealed the deal. I know a lot of people who are vegetarians and vegans for various reasons – health, religious, political. So it’s nice to hear someone extolling the virtues of one of my favorite things to eat, something I don’t plan to give up.

The first section of the book covers Scott Gold’s “Month of Meat” in which he ate 31 different types of meat – land and air animals only, no seafood included – over the course of a month. From the mundane (a turkey sandwich, rack of lamb) to the exotic (frog legs, yak dumplings) to the unusual (rattlesnake chili, turtle soup) he ate it all, and enjoyed almost all of it.

Part two explores beef – the primal cuts of the steer, the author’s experience helping to butcher a calf, and offal. Offal, for the uninformed, is the organs. Gold ate everything from the head to the feet and as with his Month of Meat, enjoyed almost all of it.

Spread throughout the book are nuggets of information about meat. I learned quite a bit, such as why duck breast is dark meat while chicken breast is white meat (ducks fly longer distances, so use their breast muscles much more than chickens). There are chapters devoted to the different types of vegetarianism, Gold’s hunting expedition in which he shot a squirrel, which he later cooked and ate, and the future of meat, including cloning, in vitro meat and genetically modified meat that’s healthy.

If you too are a meat lover and proud of it, check out The Shameless Carnivore. Just don’t read it while you’re hungry.

Nancy is still yet to try Rocky Mountain oysters, though it’s on her bucket list. She writes about her 2 boys and life in Colorado at Life With My Boys

« On Reading: For Expectant Mothers, and Beyond
My Name Is Not Alexander »