, published by Candlewick, is a winner of the Carnegie Medal. I was attracted to the book initially because it was a work of World War II fiction and I like books set within that time period. From the back cover: 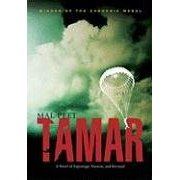 In the “Hunger Winter” of 1944, two Allied spies parachute into Nazi-occupied Holland, sent to support the Dutch resistance movement. Half a century later, fifteen-year-old Tamar inherits a box from her grandfather containing a series of clues and coded messages. Out of the past, another Tamar emerges – a man involved in the terrifying world of resistance fighters. His story is complex, filled with passion, love, jealousy, and tragedy set against the daily fear and casual horror of the Second World War. Unraveling it will transform Tamar’s life.

This book is marked for teens but it did deal with some mature sexual themes and there is quite a bit of bad language – both British and American. The writing is intriguing and suspenseful and the book keeps you guessing. I just had to think that 14 might be a bit too young.

The book is exactly as it describes itself to be in my opinion. I, in my quest to know the end of the book, flipped to the end and devoured that. (I NEVER read the end of the book first. I am a take-one-page-at-a-time-exactly-how-they-come reader, but I wanted to know how this one concluded.) If you like espionage, intrigue, a bit of romance and have no problems with the language, you’ll like the book. It is written in such a way that it unfolds VERY well so I found the story to be really engaging. Throughout the story the writer flips back and forth from 1945 to 1995 so you are fed the story puzzle piece by puzzle piece. It reads like a suspense/action film. Keeps ya on the edge of your seat. Just have to beware of the language and themes!