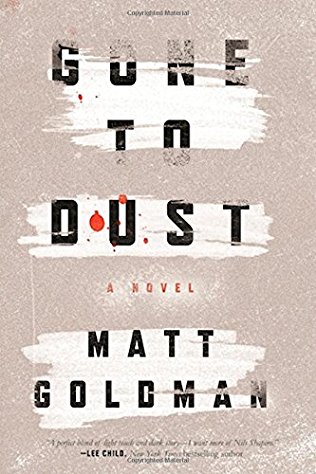 The victim, Maggie Somerville, was drugged and then strangled, and her body was found in an otherwise-neat bedroom in a wealthy suburb of Minneapolis,  full of joggers and McMansions. But the place was strewn with the contents of hundreds of vaccuum cleaner bags, completely obliterating all chances of DNA samples. On top of that, Maggie was a nice, friendly, divorced mother, without any dark secrets or wild escapades. Who on earth could have wanted her dead?

Nils Shapiro (Jewish but named after father’s Swedish friend) is a PI, trained as a policeman but gone freelance, and one of his pals from Police Academy gives him a call and puts him on the case. The two begin investigating. Maggie’s cell phone reveals a lot of calls to an unknown number; when traced, it leads them to a woman who might know a secret that could devastate Maggie’s family. There’s also the matter of Maggie’s lover, a man Nils knows from high school and has never liked. He runs a call center that hires a lot of Somali immigrants, and the FBI is investigating some of them for links to terrorism. Before Nils knows it, he finds out he trodden on the FBI’s toes, and they are taking him off the case.

Winter in Minnesota is almost its own character in Gone to Dust, from cars that refuse to start, to out-of-towners revealed by the outerwear (or lack thereof), to fires, blankets and whiskey needed to counteract its effects. Nils is trying to forget his ex-wife, and while he has no problem meeting other women, he is having a hard time moving on from his divorce. His character is a nice blend of the know-it-all tough detective type made so popular in the works of people like Eric Gardner and Dashiell Hammett, with just a nice Midwestern boy who cares about others and about doing what’s right. He’s a very appealing character, and I enjoyed the book very much. A great new series.

« Back to School Learning with National Geographic Kids
The Talented Ribkins »