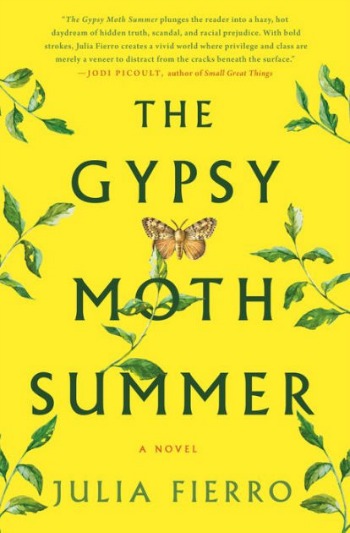 The year is 1992, and the residents of Avalon Island are having their usual summer lifestyle disrupted by an infestation of gypsy moths. The sheer number of larvae is so great that the sound of them chewing leaves en masse can echo across the island. Among the two main communities, the upper crust on the east side and the working class on the west, tensions are rising for a variety of reasons amidst the backdrop of this phenomenon. Julia Fierro’s The Gypsy Moth Summer takes on several hot-button themes with interconnecting storylines.

I was initially drawn to this novel for its described storylines seemed focused on self-discovery, racial identity, socioeconomic status, and familial relationships, both positive and downright abusive. All of these themes are clearly ripe for great exploration. The island is the home of an aviation factory which employs workers from the west side while being run by the military engineers whose families live in luxury on the east side. An environmental concern is growing as the number of cancer diagnoses among the island’s residents, from both communities, steadily rises. The daughter of one of the island’s most established wealthy families returns to Avalon this summer, bringing her African-American husband and their two biracial children to live at her parents’ lush estate, and their arrival leaves the homogenously white community reeling. Her husband, though uncomfortable on the island and initially quite wary of making the move, becomes enamored with the expansive gardens, utilizing his education and training in landscaping architecture to try to restore them and save them from the moths’ devastation. In addition, a teenage girl whose family straddles both communities is struggling to find her place among her peers, but is immediately drawn to the new boy on the island.

As you can see, there are multiple storylines being told in this novel, and I actually left out a few. Unfortunately, I ended up feeling like each storyline either met a dead end, especially in one particular case that was actually quite disconcerting for a young boy, or it just didn’t get explored with the depth or authenticity that I longed for. Though racism is significant to several of the stories of the large cast of characters, in the end, it seemed that the challenges faced by the African-American characters only served to push the white characters’ narratives, at the sacrifice of the only two major characters of color, who (mild spoiler alert) don’t meet with success or positive ends by the final page.

The imagery of the gypsy moth invasion and their ever-present metamorphosis paired well with the overall plot of an island on the edge of a significant and unalterable change, though in the end, the metaphor may fall flat with how events actually play out. It was an interesting read, but it often felt as if the author took on too many characters without fleshing out most of them adequately, while stereotypes and literary tropes were heavily relied upon.

For more perspectives, check out the TLC Book Tour for The Gypsy Moth Summer.

« What’s on Your Nightstand? June 27
The Seven Husbands of Evelyn Hugo »