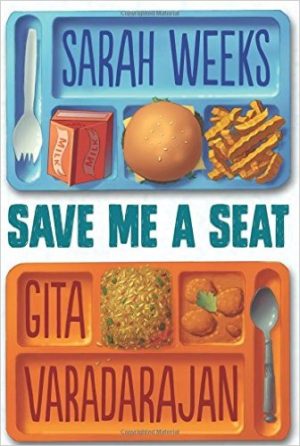 Joe is not looking forward to 5th grade. His entire year in 4th grade, he felt like a zebra with one foot in the mouth of a crocodile. The crocodile is Dillon, the most popular — and the meanest — kid in class. He’s back, but unfortunately Joe’s best friends, twin brothers, moved away over the summer, so he’s left without an ally. Sometimes he eats lunch with Miss Frost, the teacher who helps him with his auditory processing disorder. Unfortunately, he doesn’t meet with her the first day of school, so he sits alone, well, actually at the opposite end of the table with the new kid.

Ravi just moved to the United States from India. He was top in his class there, excelling in Math and English and cricket, so he isn’t worried about fitting in at all. Unfortunately, things aren’t as easy as he hoped. Everyone calls him RAH-vee, which means nothing, instead of Rah-VEE, which means sun. The teacher can’t understand his English, and even thinks he might need to see a special teacher called Miss Frost to help him. There’s only one other Indian in the class. Dillon is what Ravi and his family call an ABCD, American born confused Desi, but Ravi knows they will be friends. At lunch the first day, Dillon’s table is full, so he sits by himself and observes.

Save Me a Seat is told in alternating points of view from Joe and Ravi. It is co-written by Sarah Weeks and Gita Varadarajan, who just relocated from India to America 5 years ago, giving Ravi’s voice true authenticity.

I flew through this story, which all takes place over just a week. The characters are fully fleshed out and the story moved along as we see Ravi’s and Joe’s perspectives and expectations change.

« How to Be a Person in the World
Nine Women, One Dress »