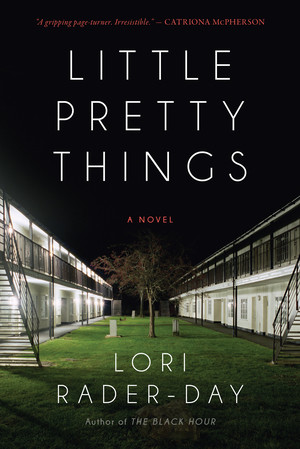 Juliet Townshend was almost a track star ten years ago, but it was never enough. In her small-town high school she was very fast, but she was always overpowered by Maddy Bell, the real star, always in first place. Juliet’s main memory is of Maddy’s ponytail always bouncing infuriatingly in front of her, although the two were still best friends. So she lost out on the big scholarships, but she went to college anyway, only to drop out during her first semester after the sudden death of her father. Now, ten years later, she’s working a dead-end job as a maid at the Mid-Night Inn, a dreary stop halfway between two cities. Her mother has become unable to leave the house, unable to hold a job, unable to do anything. Juliet drives an old car and has a new best friend, her fellow maid Luisa, and she’s always flat broke and barely scraping by.

One night a gorgeous woman walks into the Mid-Night, wearing expensive clothes and perfume, with perfect hair and an enormous diamond ring. Juliet doesn’t recognize Maddy at first, and when she does, she wants nothing to do with her. They sit and talk a bit, but Juliet pushes her away, jealous of all she’s attained and still unsure of what happened at the end of their senior year. The next morning, Maddy’s body is found strangled and hanging from the balcony, the belt of her raincoat wrapped round her neck.

While it’s true Juliet is a suspect, she begins to look into things more as a way of coping. The main policewoman is an old classmate, Courtney, and she and Juliet have an uneasy relationship, at times approaching friendship and at times more wary and questioning of motives. Juliet’s actions in investigating have a way of putting her continually in the spotlight, as she enters the murder scene looking for clues, or visits Maddy’s old house where the police are also searching. Juliet’s habit of palming and keeping what she thinks of as “little pretty things,” odds and ends that no one will miss like a shiny child’s barrette or a perfume bottle, only add to the suspicion surrounding her.

With the Mid-Night closed, she takes a job substitute teaching PE at her old high school, and the memories flood back. Things that passed her by when she was a naive teenager warrant a second look with an adult interpretation. It soon becomes clear that Juliet is not the only one helping herself to little pretty things that don’t belong her, and why Maddy came back to Midway.

is a murder mystery, obviously, but its real strength lies in its look at relationships between women. How do they respond to others’ neediness, insecurities, weaknesses, flaws? The author looks at teenaged relationships between high school girls, as well as how those patterns carry out into adulthood. It’s sort of a hybrid of women’s fiction with a gritty murder mystery thrown in, and I really enjoyed this combination. The mystery is well-done, and even though I figured out the general direction early on I was still anxious to see how it played out. But what stayed with me was the contemplative look at the ways women can build up or tear down each other.

Add this one to your TBR pile!