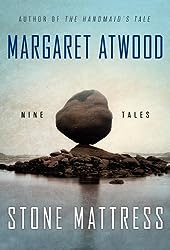 Most people know of Margaret Atwood because of The Handmaid’s Tale and its male-dominated society ruled by a totalitarian and theocratic government that is required reading in many schools. But Atwood is a prolific writer of speculative fiction, as she prefers to call her brand of science fiction. She recently published Stone Mattress: Nine Tales, a work that showcases her talent for dark humor and psychological insight.

One thing the tales in Stone Mattress are not is happy — most involve death in one way or another, and I guess the “write what you know” adage is true as the 75-year-old Atwood’s main characters are mostly older adults. But they’re all thought-provoking with the type of open endings that are common in short stories, though Atwood would prefer they be called tales.

The first three tales — “Alphinland,” “Revenant,” and “Dark Lady” — are linked, revolving around a writer, a poet, and a muse respectively, and can be read in any order. “Lusus Naturae” is the shortest of the tales, featuring a young girl with a disease that causes her to resemble a vampire. In “The Freeze-Dried Groom” a man with shady business dealings buys a storage shed with the contents of a wedding, including the groom, and then has to contend with the bride. “I Dream of Zenia with the Bright Red Teeth” is my least favorite of the tales, in which Zenia is a woman who has stolen a man from each of three friends, and returns after her death in the form of a dog. This tale is a follow-up to the novel The Robber Bride so perhaps I’d have enjoyed it more had I read that book.

“The Dead Hand Loves You” has a tale within a tale – an aging writer tells of how he wrote his horror novel when he was young and naive, and promised portions of the book’s sales to his roommates in lieu of the rent he owes them. The disembodied hand story is a familiar one but I liked the idea of witnessing the story as its written. In the title tale, “Stone Mattress,” a retired woman bumps into a man from her past while on a cruise and takes revenge for past wrongs in the form of the perfect crime. And “Torching the Dusties,” my favorite of the tales, features an old age home under attack by young protesters who resent the elderly residents for their mere existence it seems, and how the desire to survive is strong even in those near the ends of their lives.

I liked the variety in the tales, and one thing I really like about short stories is the ease of reading one at a time. Fans of Atwood’s work aside from The Handmaid’s Tale will recognize her wit and imagination, but those not familiar with her other work should check these out as well. If you are often frustrated by the sudden ending of a short story, then this collection probably isn’t for you. But the unique and compelling tales are not to be missed.