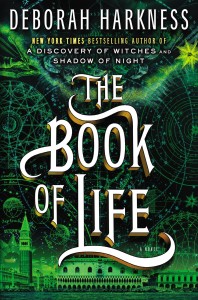 It seems as though in a series, there is inevitably the book that disappoints the reader and doesn’t quite stand up to previous books. I always cross my fingers that subsequent books regain the glory of the series so I can have some closure, and fortunately Deborah Harkness succeeds with the third book in her All Souls trilogy, The Book of Life.

When I first received Discovery of Witches as for review three years ago, I tore through it. I adored the first book in the series and was first in line at the library when the second book came out. I was disappointed with it, as Diana and Matthew spent most of the time time traveling to 1590 rather than working to solve the issues in the present. The book felt as though it were written purely to provide the background needed to move the story forward again in the next book, so I held out hope for The Book of Life. Again, I was first on the library wait list and was able to check out a copy the day after the book was released. I wasn’t disappointed.

In the final book in the trilogy, Harkness has regained her magic with the series. Diana and Matthew have returned to the present and are ready to continue their quest to find the secret to the text Ashmole 82 that Diana had accidentally called up in the Bodleian library at the start of A Discovery of Witches.

That said, one chapter in, I was almost resigned to having to reread at least the second book in the series if not the entire series to ensure I remembered all the details of what had happened, not to mention who was who given the huge cast of characters Harkness has developed. One friend decided to do so three pages into the book, but I decided that I would read it straight through (since I only have a week with new releases to finish them!) and hope that I remembered enough to figure things out. This is one of the series where a reader is severely handicapped if the first two books are skipped. While The Book of Life does stand on its own, there are so many references to previous books and important events that lead to the plot that I wouldn’t recommend plunging in with the third installment.

This time around, Diana is aware of her powers and knows she needs to track down the final two of three missing pages from Ashmole 82 to be able to make sense of the book and answer questions that have gone unanswered for witches, daemons, and vampires for centuries. She and Matthew are also determined to repeal the Covenant, which requires the separation of the three races. With her a witch and Matthew a vampire – and Diana pregnant with twins – they have obviously broken the Covenant already but believe that there are wider dangers to its continued existence.

Benjamin, a son of Matthew’s who he has repudiated centuries ago to the point that he is not included in the official vampire family trees stored with the Congregation (which oversees the Covenant), has reappeared to taunt Matthew and the de Clairmont family. He is torturing witches, doing his best to figure out how to impregnate them and is threatening to use Diana to figure out how.

Between the dynastic struggles within the de Clairmont vampire family and the taunts of the hidden Benjamin, life is full for Diana and Matthew even without having to reunite the missing pages and repeal the covenant and determine who murdered her Aunt Em. Not surprisingly, the book is as thick as you would expect it would need to be.

And it has returned to its former glory, becoming once again a book where I promise that I’ll read “just one more” chapter before putting it down. The characters are compelling, and the plot lines once again make sense. The book is driving toward a purpose on every page, and I fell in love all over again.

As with every book, there is no way to predict exactly where Harkness is going with her characters or the plot. It is unique enough that there is no true formula to follow, so you stay figuratively glued to the edge of your seat throughout the book. This is the conclusion of the trilogy, but as you near the end, you start to wonder if Harkness isn’t setting the stage for further books featurning Matthew and Diana. As a reader, I can only hope there is more to come in their world.

Written by Michelle, who is beyond grateful that her own world isn’t peopled with daemons, vampires, or witches. At least as far as she knows. See what does inhabit her world, as she shares it on her blog Honest & Truly! and on Twitter where she is also @HonestAndTruly.