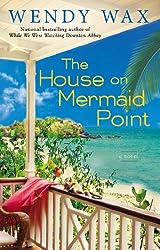 The ladies of Wendy Wax’s Ten Beach Road series (read my reviews of Ten Beach Road, where they renovate Bella Flora, the house they’ve received as victims of a Ponzi Scheme, and Ocean Beach, following their adventures on a reality show, and the novella Christmas at the Beach, as they say good bye to Bella Flora), have returned to renovate another house, this time owned by aging rocker William “the Wild” Hightower, fresh out of rehab. It’s the second season of their network reality show, Do Over, and as usual they don’t know where they’re going, or what they’re in for, until they arrive.

As usual the women have their own issues to deal with in addition to the renovation of the house on an island and the network’s budget and time restrictions. Maddie is learning how to be single again, fresh off her divorce, and refuses to acknowledge her attraction to Will. Nicole is cautious about taking the next step with her hunky FBI agent boyfriend, and still has to contend with her brother in jail. Avery misses her own hunky boyfriend, who’s home caring for his ill father and his boys, but is finally willing to collaborate with her mother, Deirdre, after finally forgiving her for abandoning her and her father. And Kyra just wants to protect her son Dustin from the paparazzi, who want photos of the child of a famous actor, while recording her own version of the events of the reno and battling with the network.

The ladies also have to contend with a time-challenged rooster, the airing of Do Over‘s first season, being trapped on the island and dependant on others to get them off by boat, living on a houseboat with only one bathroom, the paparazzi who’ve quickly learned where they are and are clamoring for pictures of not just Dustin, but also Will, all while continuing their nightly ritual of viewing the sunset, but hiding the alcohol since the island is dry due to Will’s addiction.

The House on Mermaid Point is the third book in the series, plus the novella, and they definitely need to be read in order. While there are references to the previous books, to really understand all the women have been through, the other books should be read first.

These books are great summer reads and every year I look forward to the next one. I only wish I was down in Florida with the ladies, though I could do without the house renovations.