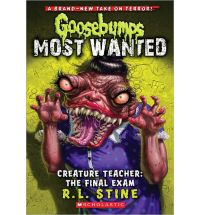 The wee ones fell in love with The Goosebumps series when we listened to the audiobooks during carpool rides years ago. They’ve read all the current books and eagerly await each new installment. R.L. Stine’s newest series within the Goosebumps realm is the Most Wanted that features the “creepiest, crawliest, grossest villains of all time.” Creature Teacher: The Final Exam follows twelve year old Tommy Farrelly as he heads to summer camp.

Tommy comes from a competitive family. Though it’s just four – his parents and his sister Darleen – they manage to compete for everything from who gets to a restaurant first to who finishes eating fastest and more. Everything in life is a competition, except Tommy simply isn’t interested in following their example. Needless to say, his family – very vocally – considers Tommy to be a loser and send him to Winner Island Camp where losers never leave the island. Though his family assumes that means everyone will be turned into a winner, Tommy quickly realizes that there’s a much darker reason behind it.

Winner Island Camp is tormented by a teacher who simply showed up one day. Mrs. Maaargh is really a monster, and Uncle Felix, the camp’s director, has made a deal with her that she can eat the loser of the camp at the end of the session if she lets everyone else go home. With Tommy arriving two days late, he’s already several steps behind, and the fact that he doesn’t believe what his fellow campers tell him about the camp only makes it worse. He’s quickly on the bottom of Mrs. Maaargh’s list.

Though the book is aimed at kids, it’s one that adults can read without rolling their eyes repeatedly. It’s obviously a different world and somewhat over the top, but the characters are so different from book to book and have such definite personalities that it is an enjoyable read. I like that the characters don’t change entirely throughout the book but rather use what others consider weaknesses to overcome their obstacles by the end.

Written by Michelle who fortunately has much fonder recollections of summer camp. See what else she remembers on her blog Honest & Truly! and follow along with her on Twitter where she is also @HonestAndTruly.