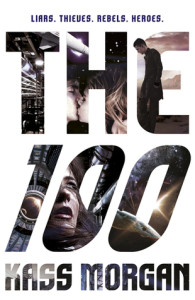 Take the class system and limited resources of The Hunger Games, add in a love triangle (also in Hunger Games, huh?), a crash and limited resources a la Lost and mix with 2001: A Space Odyssey (I just picked that space movie out of thin air, so it could be more like Star Trek for all I know), and you have The 100. But I’m not calling it derivative. It was an unusual and interesting combination in my mind, bringing together all the elements of a good Young Adult book. It’s pretty light and easy, but that’s okay too.

A few hundred years ago, earth was hit with a nuclear detonation. A group of people are living on a space station, where they’ve been researching radiation levels, hoping to be able to return. When supplies on the ark start running low in spite of a judicious capital punishment system and severe population control, the chancellor decides to send a group of 100 juvenile offenders currently in custody down to earth to see if it’s habitable.

One whom was supposed to go escaped just before departure, so the story on the ark continues as well through her eyes, while those on earth are left to try to set up camp, find food, and all get along.

By the time I was 3/4 finished, I knew that it wasn’t going to be the end, about which I had mixed emotions. I’m interested in knowing more about these people and their worlds, but it ended without much of anything resolved, which is disappointing. I don’t mind the typical trilogy model, but I like to feel some sort of complete story arc by the time I get to the end of the novel.

Coming soon on the CW:

There’s a lot of hype about the fact that this was already developed for television before the book even came out. I think it will make a good television show, and yes, knowing that, I could picture it in my head that way, but I don’t think that makes the book any less of a good read.

You can watch a preview of the show which is slated to be a mid-season replacement. Of course I’ve already noticed some differences in plot, but I think it will be one my 15-year-old daughter and I might watch together.